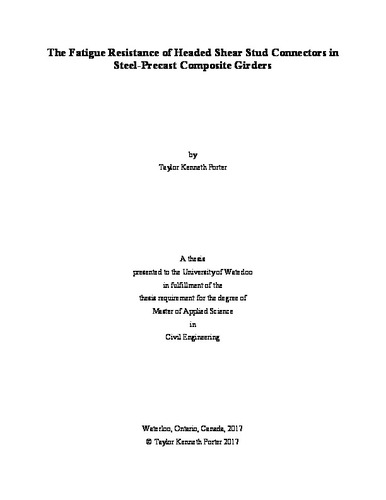 Extensive research dating back to 1965 has been conducted on the fatigue performance of headed shear stud connectors in steel and cast-in-place composite girders. However, little research has been conducted specifically on the fatigue performance of headed shear stud connectors clustered into pockets. It seems that design provisions for pocketed shear connectors have been established assuming their performance is no different than that of continuous connectors, based on limited tests, terminated before failure, primarily on direct shear specimens that do not precisely model the loading that a shear connector is subjected to in a bridge girder. This research study investigates the fatigue behaviour of continuous and grouped shear stud connectors for cast-in-place and precast deck applications, respectively. A total of six cast-in-place and six precast composite beams have been fabricated, instrumented, fatigued to failure, and monitored in order to generate new, valuable fatigue data. This data will improve the understanding of the fatigue behaviour of headed studs in composite beam specimens subjected to static and variable amplitude loading. An autopsy program is implemented to further investigate the fatigue cracking behaviour of the shear connectors. The findings provide clear evidence that studs in precast application perform differently compared to cast-in-place as different fatigue cracking patterns were observed. Two non-linear finite element models have also been assembled in ABAQUS and compared to the results collected from the physical experiments. Additionally, a concrete shrinkage simulation is completed on the cast-in-place model to investigate its effect on the fatigue cracking behaviour. The results from this simulation are found to agree with the observed cracking patterns. S-N regression analyses are completed to determine the mean regression curve corresponding to a 50% survival probability. In this analysis, the stress ranges assigned to the studs were determined utilizing three methods that introduced three levels of conservatism. In every case, the precast specimens were found to outperform the cast-in-place in terms of fatigue performance. The findings in this study propose that the cast-in-place and precast specimens have a greater conformity with a fatigue resistance curve defined by a Category D and Category C detail, respectively. It is suggested that the design provisions governing the fatigue performance of shear connectors remains the same until a more intensive probabilistic approach is taken.