The Interval: in-between unmaking and remaking the body 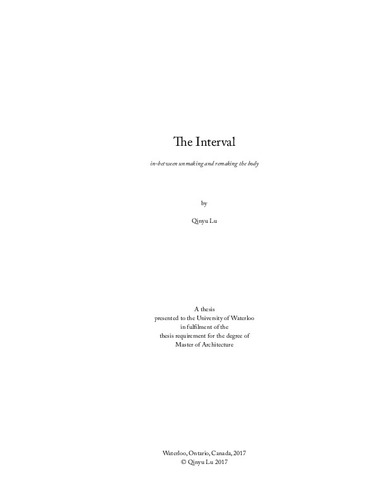 By its individual terms, we can think of a body in two coincident ways that meet it in the middle: from the familiar inside-out and from the less familiar outside-in. To proceed from the middle of things conceives of a body always already extended into the world, able to affect and be affected by other bodies that share its environment. That is to say, a body is both a self-sustaining composition of related parts and a composition of the environmental forces that assemble its relations as a body. In contrast to a body’s eminently apparent material composition, its immaterial movements are observable only in dynamic continuity and shifting relations among other bodies. Elusive as movements may be, the impact they carry are felt in a body as intensive force or sensation, bringing individual bodies into immediate relational movement. Intensively connected, bodies shift each other’s movements in time and space by their affective powers. Opening an inquiry into the interval, the moment of encounter, enters into the immediacy of relational movement between bodies—the pre-personal gap of space and time between stable forms in which a body is reconstituted in a state of instability. The body’s dynamic plasticity is first presented in three sets of pictures that isolate its material corporeality and immanent movements before reassembly as living bodies caught in the middle of intense physical negotiation. The liminal body is then opened in detail along its constituting lines and its processes of framing, registering, and moving through the world by which it returns to itself innately. A critical analysis of paintings by Francis Bacon reveals the methodical practice and the intensity of forces required to unmake and remake bodies in paint, while Antonin Artaud practices his method on the masses via the production of bodily performance. A final return to the individual body calls on the imperative to take up movement in counterpoint to other bodies as both productive experimentation and the reciprocation of power at the body’s shifting limits.