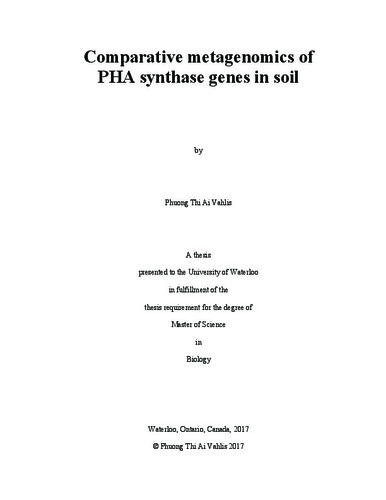 Polyhydroxyalkanoates (PHAs) are biopolymers produced naturally by bacteria. They are of considerable scientific interest as fundamental components of bacterial carbon metabolism and have biotechnological applications as potential bioplastics. To date, studies of PHA metabolism have focused on a restricted set of PHA-producing bacterial species. Therefore, the diversity of PHA-producing taxa and gene sequences, and the efficiency of existing primers to recognize PHA marker genes, is unclear. In this thesis, I report the first large-scale metagenomic analysis of PHA producing taxa through taxonomic and functional profiling of 45 soil metagenomes from a broad range of soil types (bulk and rhizosphere). From a total of 229,070 detected class I-III PHA synthase (phaC) genes, PHA-producing microbial communities were inferred and compared between soil environments, and the sequence diversity and primer efficiency for different classes of phaC genes was analyzed. Analysis revealed several main findings: 1) both known and novel PHA-producing taxa were inferred to contribute high proportions of phaC genes in environmental samples; 2) distinct shifts in the PHA-producer communities were observed both between soil types and between phaC classes; 3) phaC-containing species were detected at relatively higher abundance in rhizosphere soils implying a significant role for PHA storage in rhizobacteria; 4) existing primers did not adequately cover the sequence diversity of environmental homologs, and metagenomic diversity can be used to suggest modification that improve primer efficiency.