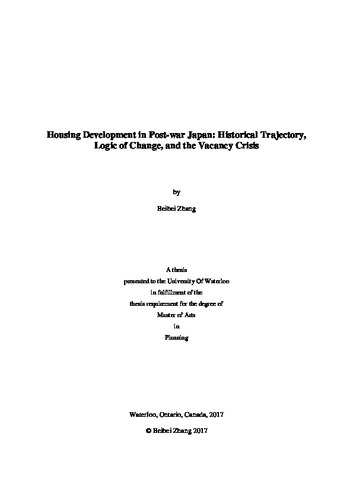 1) As evidenced by existing studies, housing development plays a central role in capitalism. However, little research has explored the logic of that role. This thesis contributes to filling this knowledge gap through a case study of housing development in post-war Japan. The case of Japan is interesting for the continuous increase in the national housing vacancy rate throughout the post-war period, which has reached an all-time high of 13.5% in 2013. The thesis argues that this phenomenon cannot be explained without considering the logic of the centrality of housing development in Japanese capitalism. 2) The thesis builds an integrated approach of political economy and historical institutionalism to explore the aforementioned question. Applying this approach to the case of Japan, the analysis refers to the theory of the developmental state to analyze Japan’s macro political economy and to the concept of productive welfare capitalism to analyze the role of housing development in Japan’s capitalism. Based on a punctuated equilibrium model of institutional change, the research uses key ideas in historical institutionalist analysis - critical junctures and fast-moving/slow-moving institutions - to examine the transition of the state, the change in the way housing development was centralized in the state, and the state’s shaping of the supply-demand relationship in the housing market. The empirical evidence mainly derives from governmental documents and secondary sources. 3) The main findings are as follows. Driven by the ideology of developmentalism, the central government of Japan has been directing the majority of resources to achieve developmentalist goals. Social policies have been expected to contribute to national economic growth rather than guarantee universal welfare rights to the citizen. Housing policies have been no exception. Throughout the post-war period, the central government has been intervening in housing provision and consumption through a variety of institutional measures such as welfare policies, finance policies, planning regulations, and taxation. The political logic of doing so lies in a desire to maximize the housing sector’s contribution toward national economic growth under the changing social-economic circumstances, while the choosing of interventions has also reaffirmed path dependence. The pro-growth interventions on housing have been interacting with the society and market and led to a dangerous oversupply of housing and an extremely high vacancy rate. 4) The logic of the centrality of housing development in capitalism like Japan’s is embedded in the dominant economic ideology of the capitalist state. This ideology determines the role of housing in that state. It interacts with outside influential ideologies and drives change of the fast-moving institutions (e.g., policy and political institutions) that centralize housing development in the capitalist state. The way of change depends on the interaction between the slow-moving institution of ideologies and the fast-moving previous institutions. 5) The research has also uncovered the social impact of Japan’s developmentalist housing policies. During economic stagnation, these policies have been driving continuous construction of new housing for economic recovery and have unavoidably accelerated the depreciation of old housing. They act as an invisible hand to transfer homeowners’ housing assets to the state, thereby supporting the state pursuing its developmentalist goals. Particularly, aged households, whose assets are largely embedded in their housing property, are more likely to suffer financial hardship and increased uncertainty.