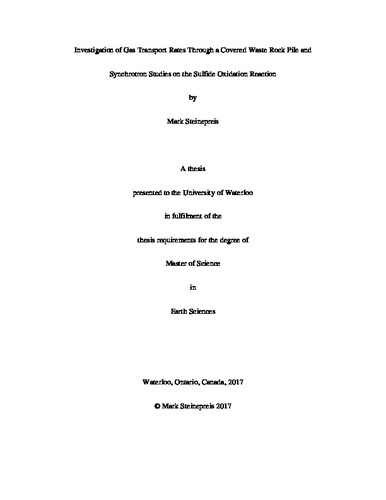 This thesis presents a field based investigation into gas transport mechanisms and rates through a waste-rock pile with a low permeable cover, and a synchrotron based study into intermediate sulfidic species that are produced as iron-sulfide grains oxidise to sulfate. The two studies are at different size scales, however both improve the understanding of the processes that affect the production of acid rock drainage and the release of metals to the hydrosphere at mine sites. The study site for the gas transport investigation was waste-rock stockpile #3 at Detour Gold Corporation mine (Detour), operating in northern Ontario, Canada. Field monitoring was carried out during late 2014 and through 2015. Wind vector, air pressure and temperature were recorded around the exterior of the pile; pore-gas pressure, pore-gas concentration of O2 and CO2 and temperature were recorded within the pile. Correlations between external and internal pressure indicated that transport through the cover and waste-rock was laminar and therefore followed Darcy’s law. Fluctuations in ambient temperature were dampened through the cover and within the waste-rock; internal pile temperatures were higher than average daily ambient temperature during the winter and lower in the summer. The O2 concentrations in the pore-gas were higher and more variable in the summer (5-15% v/v at approximately 2.5m into the pile) than in the winter (consistently below 3% v/v at 2.5m depth). Design efforts to reduce the O2 level within the pile should therefore be optimised for summer time conditions. The CO2 concentrations were higher and more variable in the summer (0.5-6% v/v at approximately 2.5m into the pile) than in the winter (between 7-8% v/v at 2.5m depth). Numerical simulations were carried out in COMSOL version 5.1 to prepare a calibrated model for gas transport through the pile. Field measured parameters were used as boundary conditions for the exterior of the pile, and field measured parameters for the interior of the pile were compared with model outputs to consider calibration. Numerical simulations indicated that the advective flux of O2 through the cover and into the interior of the pile is approximately 100 times higher than diffusive fluxes during the summer. Increasing the thickness of the cover and using a cover material that has a lower permeability would further reduce the O2 concentration within the pile. Two sulfide grains (one chalcopyrite and one pyrrhotite) that were collected from crushed waste-rock samples from Detour were analysed at the synchrotron at the Advanced Photon Source at Argonne, Illinois, USA. It is understood that sulfate is the ultimate oxidation product of sulfides, however less is known about intermediate sulfidic species that are produced. Linear combination analysis of the X-ray absorption near edge spectra (XANES) for the grains and standard sulfidic species indicated that variable combinations of chalcopyrite (CuFeS2), pyrrhotite/troilite (FexS1-x/FeS), marcasite (FeS2), elemental sulfur (S0) thiosulfate (S2O32-), tetrathionate (S4O62-), sulfite (SO32-) and sulfate (SO42- ) are present over the grains. It is not currently known if the inclusion of these species in predictive simulation of sulfide oxidation rates is warranted.