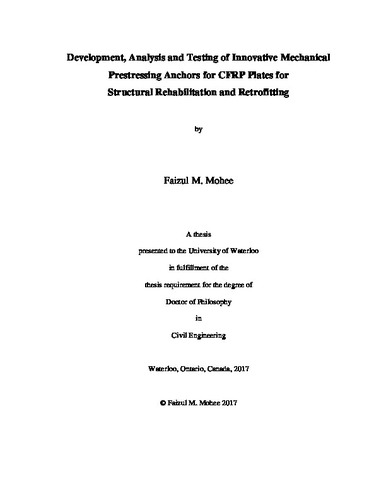 This thesis presents the development, analysis and experimental investigation of three innovative, easy-to-install, low cost, epoxy-free, mechanical, friction-based, compact, high-strength, prestressing anchors for carbon fibre-reinforced-polymer (CFRP) plates. Two anchors (anchor #1 and #2) were developed to prestress the popular and commercially available 50 mm ⨉ 1.2 mm CFRP plates with 2,800 MPa strength, while the third anchor (anchor #3) was for the 50 mm ⨉ 1.4 mm CFRP plates with 2,900 MPa strength. Two anchors (anchor #1 and #3) were made of heat-treated H13 steel. Anchor #2 was the corrosion resistant anchor, and it was made of heat-treated 440C stainless steel. Each anchor consists of a CFRP plate, two annealed copper sleeves, two steel wedges and a steel barrel. The novel CFRP plate anchors were designed and analyzed by means of: (1) experimental friction tests; (2) finite element numerical modelling; (3) mathematics-based analytical modelling; and (4) experimental investigations of the anchor prototypes. Friction tests were conducted to characterize the tribological behaviour and to determine the coefficient of friction values between the CFRP plate and two types of copper plates (as-received and annealed). Finite element numerical models were developed to investigate the mechanics of the three anchors. A parametric study, using the numerical models, was carried out in order to optimize the anchor design. A unique mathematics-based analytical model was developed to predict the contact pressure distribution on the CFRP plate inside the anchor under loading. A manufacturability study was also conducted for the new anchors including the selection of materials, the heat-treatment procedure and 3-D rapid prototyping. This thesis also presents the experimental results of twenty-nine tension tests to measure the performance of the anchors under loading. The new anchors were optimized through a sequential testing program for different design parameters. All three new anchors carried a load of more than 100% of the guaranteed ultimate tensile strength of the CFRP plate without any premature failure or slip of the CFRP plate from the anchor. The average failure load was 187±6 kN, 187±5 kN and 231±6 kN for anchor #1, #2 and #3, respectively. The failure mode of all of the anchors was the tensile rupture of the CFRP plate at its free length outside of the anchors. The results show that the anchors do not require any pre-setting equipment. The new anchors can be used for new construction and for the repair, rehabilitation and retrofitting of aging infrastructure by prestressing the CFRP plate in bridges, buildings, tunnels, dams, marine structures and other structures.