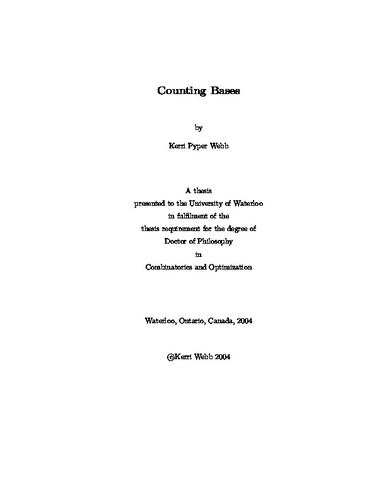 A theorem of Edmonds characterizes when a pair of matroids has a common basis. Enumerating the common bases of a pair of matroid is a much harder problem, and includes the #P-complete problem of counting the number of perfect matchings in a bipartite graph. We focus on the problem of counting the common bases in pairs of regular matroids, and describe a class called <i>Pfaffian matroid pairs</i> for which this enumeration problem can be solved. We prove that when a pair of regular matroids is non-Pfaffian, there is a set of common bases which certifies this, and that the number of bases in the certificate is linear in the size of the ground set of the matroids. When both matroids in a pair are series-parallel, we prove that determining if the pair is Pfaffian is equivalent to finding an edge signing in an associated graph, and in the case that the pair is non-Pfaffian, we obtain a characterization of this associated graph. Pfaffian bipartite graphs are a class of graphs for which the number of perfect matchings can be determined; we show that the class of series-parallel Pfaffian matroid pairs is an extension of the class of Pfaffian bipartite graphs. Edmonds proved that the polytope generated by the common bases of a pair of matroids is equal to the intersection of the polytopes generated by the bases for each matroid in the pair. We consider when a similar property holds for the binary space, and give an excluded minor characterization of when the binary space generated by the common bases of two matroids can not be determined from the binary spaces for the individual matroids. As a result towards a description of the lattice of common bases for a pair of matroids, we show that the lattices for the individual matroids determine when all common bases of a pair of matroids intersect a subset of the ground set with fixed cardinality.