Methane dynamics of a constructed fen in the Athabasca Oil Sands Region, Alberta 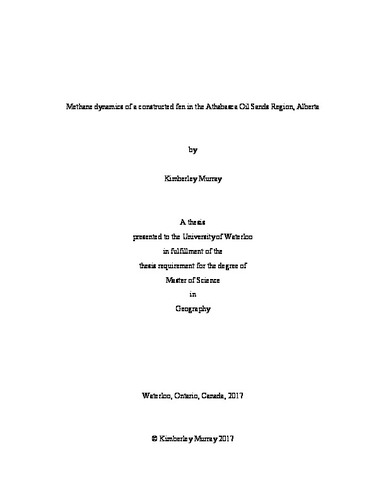 Oil sands mining activities in the Athabasca Oil Sands Region in northeastern Alberta, Canada have resulted in an extensive amount of land disturbance. The Alberta government requires some reclamation of disturbed land to be to wetland ecosystems, and given the predominance of fen peatlands in the area, fen construction on post-mined landscapes has recently been attempted. Peatlands sequester substantial amounts of carbon over thousands of years due to waterlogged conditions and inefficient decomposition, and on a large time scale provide a cooling effect on the planet’s radiative budget. However, peatland conditions are also ideal for production of the strong greenhouse gas methane (CH4). Natural peatlands emit a significant amount of CH4 to the atmosphere, particularly following formation when these ecosystems have a net warming effect associated with the large CH4 flux. Given the knowledge that the conditions that are conducive to CH4 production and flux in natural peatlands also result in the eventual accumulation of peat and carbon sequestration, understanding the CH4 dynamics of constructed fens may indicate biogeochemical function, along with the ability of these ecosystems to ultimately accumulate peat, a major goal of reclamation. Further, understanding important controls on CH4 dynamics from the constructed fen, including vegetation and geochemistry, in comparison to natural sites, is beneficial for the development of recommendation that may result in lower CH4 flux through vegetation impacts, but appropriate water chemistry for peat accumulation. For this research CH4 flux, CH4 concentration, and variables including vegetation and hydrochemistry were monitored from a constructed fen and two natural reference sites in northeastern Alberta over the 2015 growing season. A factorial greenhouse experiment was also used to understand differences in CH4 flux, concentration, and oxidation between two vascular plants, Carex aquatilis and Juncus balticus, planted for fen construction. This greenhouse experiment further considered how water sourced from the reclaimed constructed fen influenced CH4 dynamics compared to natural rich fen water. Both the field data from 2015 and the greenhouse experiment results found lower CH4 concentration from constructed fen plots compared to natural fen plots. Differences in hydrochemistry/water chemistry variables were found between constructed fen and natural fen plots in both studies, including evidence of terminal electron acceptors known to influence CH4 production such as sulfur, iron, manganese, and inorganic forms of nitrogen. While aboveground biomass and productivity in the field was found to be similar or higher at the constructed fen site compared to the two reference sites, belowground biomass was lower. In the greenhouse experiment, on the other hand, above and belowground biomass and productivity was similar between Carex aquatilis and Juncus balticus plots. Overall, several vegetation and hydrochemistry/water chemistry variables were found to significantly explain the CH4 results in the field and greenhouse experiment. For example, in both cases high sulfur at the constructed fen plots decreased CH4 flux and concentration. Lower CH4 concentration and higher relative oxidation found from plots including Juncus balticus compared to Carex aquatilis in the greenhouse experiment suggest that planting Juncus balticus in future constructed fen projects may result in lower CH4 flux. However, CH4 emissions will likely remain low at constructed fens if water chemistry does not change over time, or if future constructed fen designs are not altered to result in water chemistry more similar to natural sites.