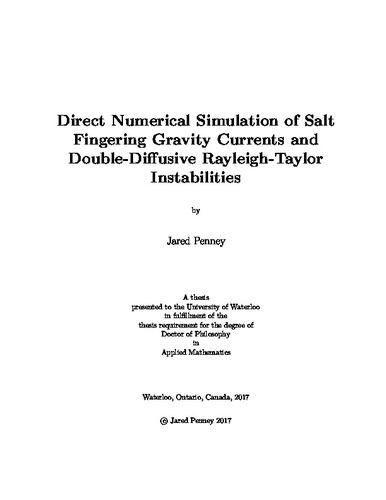 Double-diffusion refers to a class of instabilities that develops when the density of a fluid depends on two components with different diffusivities. For example, when warm, salty water is layered over cool, fresh water, there is relatively rapid diffusive transfer of heat from the upper layer to the lower layer, while there is negligible diffusive transfer of salt. This loss of heat results in localized parcels of fluid of increased density above the thermohaline interface, which sink out in the form of long, thin, convective cells called salt fingers. In parts of the ocean, salt fingers are known to be an important mechanism of heat and salt transport. However, they range from a few millimetres to centimetres wide, and are much smaller in scale than many oceanographic processes. The fine scale of these structures can also make their direct measurement in the environment using typical devices difficult. This thesis employs high-resolution direct numerical simulation for detailed examination of fine-scale double-diffusive features. An advantage of numerical simulation is the straightforward computation of quantities that cannot be measured directly through experiment, such as dissipation, stirring, and mixing. Two distinct types of flow are investigated. First, simulations of salt fingering gravity currents are examined, and the effect of different vertical boundary conditions and current volumes are analyzed. Second, a three-layer system resulting in double-diffusive Rayleigh-Taylor (RT) instabilities that transitions to double-diffusive turbulence in the absence of shear is presented. The flows are governed by the incompressible Navier-Stokes equations under the Boussinesq approximation, with salinity and temperature coupled to the equations of motion using a nonlinear approximation to the UNESCO equation of state. Flow dynamics are characterized using high-quality three-dimensional visualization techniques. In the gravity current simulations, it was observed that no-slip boundaries cause the current head to take the standard lobe-and-cleft shape, and encourage both a greater degree and an earlier onset of three-dimensionalization when compared to free-slip boundary cases. Additionally, numerical simulations with no-slip boundary conditions experience greater viscous dissipation, stirring, and mixing when compared to similar configurations using free-slip conditions. The Rayleigh-Taylor instabilities were observed to dominate the length scales of kinetic energy, while the length scales associated with the density field were dominated by double-diffusion. This was confirmed through spectral analysis, which also showed similarity between the dominant salinity and density scales. The standard eddy viscosity formulation was determined to be inappropriate for the salinity and temperature fluxes of this simulation. Due to the effects of double-diffusion, densities greater than the initial maximum value were observed in the RT instability simulations.