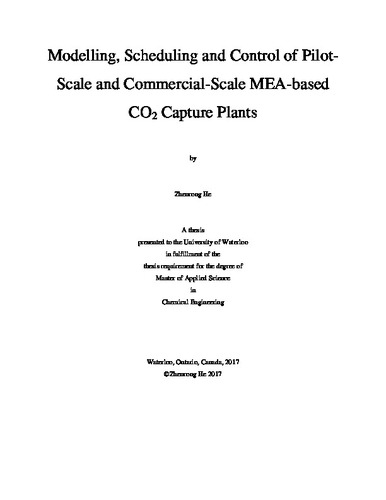 Recent reports have shown that global population is rising and more fossil fuels, such as coal and natural gas, are required to meet the global energy demands. The adverse effect of burning fossil fuels has become a concern due to its contribution to global warming and increasing emissions of greenhouse gases, particularly CO2, have been regarded as a main cause for the rising temperature of the earth’s surface. To partially address this pressing social problem, CO2 capture technology, which has been considered as an efficient and feasible technology to reduce global CO2 emissions, has been deeply explored and tested over the last decades. Among several available CO2 capture technologies, the MEA-based post-combustion CO2 capture process is considered a mature technology for mitigating CO2 emissions due to its inherent benefits, e.g. high CO2 capture capacity, low price of MEA solvent and fast kinetics. However, a large amount of energy is required to regenerate MEA solvent. Thus, the efficiency of fossil fuel-fired power plants decreases. In addition, the dynamic operation of the CO2 capture process needs to be explored in more detail to analyze the transient operation of this plant and its interaction with the operation of the fossil fuel-fired power plants. Thus, the development of MEA-based CO2 capture technology has gained attention. Based on above, in the present study, a dynamic model of a pilot-scale MEA-based CO2 capture plant was first developed and a flexibility analysis under critical operating conditions was performed followed by an implementation of simultaneous scheduling and control using the proposed dynamic model. Based on the pilot-scale CO2 capture plant, a natural gas power plant integrated with a commercial-scale MEA-based post-combustion CO2 capture process was developed. The proposed model was used to perform a flexibility analysis on the integrated systems. This study first presents a dynamic flexibility analysis of a pilot-scale post-combustion CO2 capture plant using MPC. The critical operating conditions in the plant’s main load (flue gas flowrate) were initially identified in open-loop and closed-loop. Insights from this analysis have shown that oscillatory changes with high frequencies content in the load are particularly harmful to the system in closed-loop. Taking these insights into account, a simultaneous scheduling and control framework was developed to identify optimal operating policies under the critical operating conditions in the flue gas flowrate. The results obtained from this framework were compared against a sequential scheduling and control approach. The results show that the proposed integrated framework specifies more economically attractive operating policies than those obtained from the sequential approach. Furthermore, a model describing the dynamic operation of a 453 MWe NGCC power plant integrated with a commercial-scale post-combustion CO2 capture plant has been developed. The proposed model has been used to evaluate the dynamic performance of the integrated process under various scenarios, e.g. changes in the reboiler heat duty and power plant inputs. In addition, the transient operation of the integrated plant using a pre-defined (scheduled) trajectory profile in the consumption of steam in the reboiler unit has been compared to the case of constant withdrawal of steam from the power plant. The results show that a coordinated effort between the two plants is needed to run the integrated plant efficiently and at near optimal economic points under changes in power demands. In the present work, flexibility analysis and scheduling and control have been performed based on the proposed pilot-scale CO2 capture process. Furthermore, the dynamic behaviour of the natural gas power plant integrated with the commercial-scale CO2 capture plant was assessed under several scenarios that are likely to occur during operation. The insights gained through these analyses will be instrumental to design basic and advanced control and scheduling strategies for integrated NGCC-CO2 capture plants.