On Some Stochastic Optimal Control Problems in Actuarial Mathematics 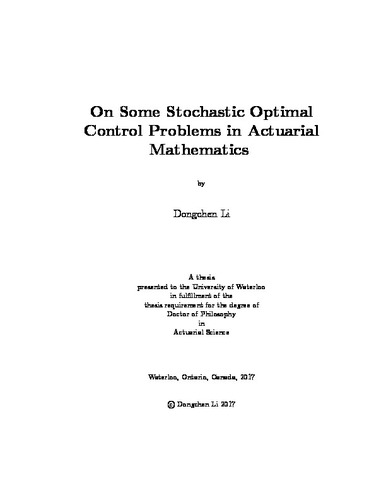 The event of ruin (bankruptcy) has long been a core concept of risk management interest in the literature of actuarial science. There are two major research lines. The first one focuses on distributional studies of some crucial ruin-related variables such as the deficit at ruin or the time to ruin. The second one focuses on dynamically controlling the probability that ruin occurs by imposing controls such as investment, reinsurance, or dividend payouts. The content of the thesis will be in line with the second research direction, but under a relaxed definition of ruin, for the reason that ruin is often too harsh a criteria to be implemented in practice. Relaxation of the concept of ruin through the consideration of "exotic ruin" features, including for instance, ruin under discrete observations, Parisian ruin setup, two-sided exit framework, and drawdown setup, received considerable attention in recent years. While there has been a rich literature on the distributional studies of those new features in insurance surplus processes, comparably less contributions have been made to dynamically controlling the corresponding risk. The thesis proposes to analytically study stochastic control problems related to some "exotic ruin" features in the broad area of insurance and finance. In particular, in Chapter 3, we study an optimal investment problem by minimizing the probability that a significant drawdown occurs. In Chapter 4, we take this analysis one step further by proposing a general drawdown-based penalty structure, which include for example, the probability of drawdown considered in Chapter 3 as a special case. Subsequently, we apply it in an optimal investment problem of maximizing a fund manager's expected cumulative income. Moreover, in Chapter 5 we study an optimal investment-reinsurance problem in a two-sided exit framework. All problems mentioned above are considered in a random time horizon. Although the random time horizon is mainly determined by the nature of the problem, we point out that under suitable assumptions, a random time horizon is analytically more tractable in comparison to its finite deterministic counterpart. For each problem considered in Chapters 3--5, we will adopt the dynamic programming principle (DPP) to derive a partial differential equation (PDE), commonly referred to as a Hamilton-Jacobi-Bellman (HJB) equation in the literature, and subsequently show that the value function of each problem is equivalent to a strong solution to the associated HJB equation via a verification argument. The remaining problem is then to solve the HJB equations explicitly. We will develop a new decomposition method in Chapter 3, which decomposes a nonlinear second-order ordinary differential equation (ODE) into two solvable nonlinear first-order ODEs. In Chapters 4 and 5, we use the Legendre transform to build respectively one-to-one correspondence between the original problem and its dual problem, with the latter being a linear free boundary problem that can be solved in explicit forms. It is worth mentioning that additional difficulties arise in the drawdown related problems of Chapters 3 and 4 for the reason that the underlying problems involve the maximum process as an additional dimension. We overcome this difficulty by utilizing a dimension reduction technique. Chapter 6 will be devoted to the study of an optimal investment-reinsurance problem of maximizing the expected mean-variance utility function, which is a typical time-inconsistent problem in the sense that DPP fails. The problem is then formulated as a non-cooperative game, and a subgame perfect Nash equilibrium is subsequently solved. The thesis is finally ended with some concluding remarks and some future research directions in Chapter 7.