Reduced Order Modeling and Scale-up of an Entrained Flow Gasifier 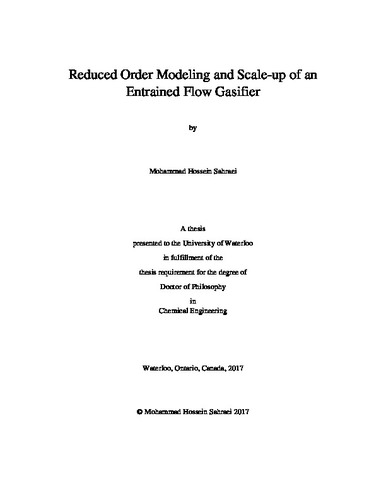 Climate change has increased attention towards reduction of carbon dioxide (CO2) emissions and other heat-trapping gases to the atmosphere. This has affected the operation of process industries, particularly solid fuel power plants which are responsible for almost a third of the total CO2 emissions. Among the choices for power generation from solid fuels, gasification-based power plants have been accepted as one of the most efficient means of generating electricity from solid fuels, when a CO2 capture unit is considered in the plant’s layout. However, improvements in the cost and availability of gasifiers are still required to make this technology competitive with combustors. In recent years, a new class of compact gasifiers, also known as short-residence time gasifiers, has been proposed to reduce the cost of power generation. To speed up the development of this technology, insights regarding the operability, efficiency and feasibility of these gasifiers are required through a mathematical modelling analysis. This research aims to develop a computationally efficient dynamic reduced order model (ROM) that considers the essential features of a short-residence time gasifier. The ROM was initially validated for steady-state simulation of the pilot-scale gasifier by using data obtained from computational fluid dynamic (CFD) simulations and experimental tests. Although the framework of the ROM was fixed and developed based on CFD simulation generated at a base-case condition, the results showed reasonable agreement between the two models under different operating conditions and kinetic parameters. In addition, the ROM predicted the experimental observations for conversion in the range of 48-90%. The proposed ROM has shown to be computationally attractive as it reduces the computation time by two orders of magnitude when compared to CFD simulations. The attractive computational costs of the ROM has allowed the evaluation of the gasifier’s performance through sensitivity analysis, uncertainty quantification, parameter estimation, dynamic simulation and process scale-up. The results of a sensitivity analysis indicated that the recirculation ratio and oxygen flowrate have a greater effect on the process compared to model geometry and kinetic parameters. An uncertainty quantification was performed to investigate the variability in the ROM’s key outputs in the presence of uncertainty in parameters that affect the feedstock’s properties and the mixing/laminar flows within different zones of the reactor network. The study revealed significant variability in the conversion, peak temperature and steam percentage in the syngas; while the dry syngas composition does not seem to be significantly affected by the uncertainty of the considered parameters. Since the recirculation ratio is the most influential parameter in the ROM, and its true value is typically uncertain, a new semi-empirical correlation was proposed to estimate this parameter. The proposed correlation improved the well-known method of Thring and Newby for jet-flow recirculation by adding a term that takes into account the changes in the feed streams on the recirculation. This feature enhances the prediction capabilities of the reactor network, especially in dynamic simulations where the inlet flowrates may change over time, e.g., for load-following power plants. The dynamic simulation of the gasifier was then performed by implementing this correlation. Accordingly, the operability of the pilot-scale gasifier based on the responses the dry syngas composition, temperature distribution, cold gas efficiency, slag thickness and flowrate were studied under sinusoidal changes in the feed, load-following and co-firing scenarios. Furthermore, the ROM was scaled-up to perform the steady-state simulation of a 3,000 TPD commercial-scale short-residence time gasifier which uses a multi-element injector feed system with 36 nozzles. The performance of the gasifier was then examined under changes in the operating pressure, number of injectors and fuel distribution among injection tubes. The results provided valuable insights regarding the suitability of design parameters and the operational conditions which may damage the gasifier’s refractory and injectors. Based on the simulations performed through this research, a systematically developed ROM that captures the streamlines of the multiphase flow, can predict the behaviour of a gasifier for a wide range of operating conditions with reasonable accuracy. Moreover, a ROM can provide valuable insights on the following objects: 1) the suitability of the design parameters and model assumptions; 2) identifying the critical operating conditions or demand scenarios that may impose a safety hazard or operational constraints; and 3) the flexibility of the system under the changes in fuel, load and failure of mechanical equipment.