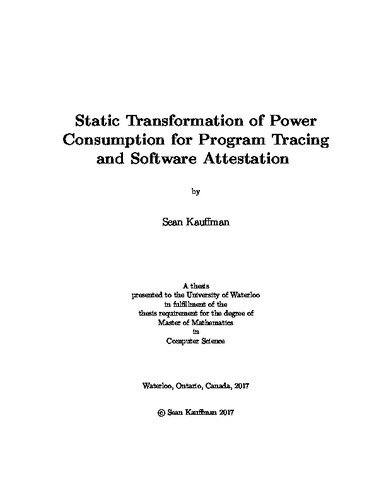 This thesis presents methods to statically modify programs at compile-time to improve the effectiveness of power consumption based program analyses. Two related applications are considered, and algorithms are introduced for both. The first is power consumption based program tracing, and the second is software attestation with power consumption as a side-effect. We propose a framework for increasing the effectiveness of power-based program tracing techniques. These systems determine the most likely block of source code that produced an observed power trace. Our framework maximizes distinguishability between power traces for different code sections. To this end, we introduce a static transformation to reduce the probability of misclassification by reordering intermediate representation (IR) to find the ordering that produces power traces with the highest distances between them. Experimental results confirm the effectiveness of our technique. We also consider improvements to the algorithm, replacing the naïve, exhaustive permutation algorithm used in the original solution with Monte Carlo permutations. Due to the complexity of the naïve solution, its search space is constrained, making it unlikely to find a good solution when the number of instructions in a program section is too large. Variations on a basic stochastic implementation are described, and their expected results are compared. The Monte Carlo algorithms consistently found better solutions than their exhaustive counterpart while showing improved scalability. We then introduce a related technique to statically transform programs to use power consumption as the side-effect for software attestation. We show how to circumvent the undecidable nature of program execution for this purpose and present a static compiler transformation which implements the algorithm. Our approach is less intrusive than traditional software attestation because the system does not require interruption to compute a cryptographic checksum. It is particularly well suited to real-time systems where consistent timing is more important than speed.