Understanding Developer’s Decision Making in the Region of Waterloo 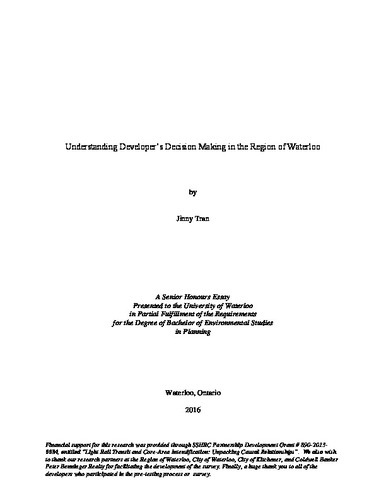 Land development--the conversion of lands to occupiable structures--represents the collective activities of key agents, including: regulators (governing bodies), land developers, real estate agents, and consumers in the market. Individual agents have different roles in the land development process. In the past, there have been many attempts to model their complex interactions (e.g. Schaeffer and Hopkins, 1987; Lai, 2001); however, these models inadequately account for factors that influence the behaviours of key agents (Gore & Nicholson, 1991; Coiacetto, 2001). More specifically, there needs to be further research and understanding of the key agent in the model: land developers. Land developers are the primary drivers of change in the development process; they propose what to build, where to build, when to build, and how much to sell it for (Bourne, 1976; Coiacetto, 2001; Morgan, 2010). Different from other agents in the development process, land developers are involved for the entire duration, from acquiring land to selling the final product (Miles et al., 2000). As noted in a literature review conducted by Antanaitis (2015), there are limited empirical studies available that target individual developers using key informant interviews. Many existing models use assumptions about developer behaviour that are often overly simplistic and are unable to account for the complex decision-making strategies of developers and other agents (Knapp et al., 1998). Key informant interviews are useful in providing an in-depth understanding of how and why certain factors affect developer’s decision making, as well as revealing potential patterns in their behaviours. This richer information could in principle lead to improved models of developer behavior. Furthermore, developer behavior can be highly location-specific. For instance, studies of developer typologies (e.g. Bourne, 1976; Fainstein, 1994; Kenney, 1972; Winarso, 2000) discovered that heuristic learning (an approach to problem solving by using general knowledge and experience, also known as using a rule-of-thumb) of land developers varies between geographic areas. Developers’ strategies are affected by local community characteristics such as demographic trends and political structure. Our study focuses on the behaviours and decisionmaking of developers in the Region of Waterloo, one of the fastest growing regions in Ontario, Canada. In addition to building a better understanding of the behavior of local developers, we intend to use the results of the research to build a location-specific model of developer behaviour. The study will also lay the groundwork to compare developers’ behaviour pre-andpost implementation of a planned light rail transit (LRT) system in future research