Hydraulic Tomography in Unconfined Aquifers and the Importance of Geological Data: Laboratory and Field Studies 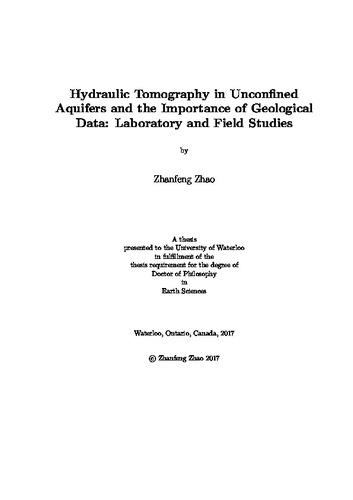 This dissertation first demonstrates the effectiveness of hydraulic tomography (HT) in characterizing the heterogeneity of both the saturated and unsaturated zone parameters through a laboratory unconfined aquifer. Specifically, a geostatistical inversion algorithm that considers variably saturated flow processes (successive linear estimator (SLE) developed by Mao2013c)) in unconfined aquifers is utilized to obtain tomograms of hydraulic conductivity (K), specific storage (Ss), and the unsaturated zone parameters (pore size parameter (α) and saturated water content (θs)) for the Gardner-Russo's model. The estimated tomograms accurately capture the locations of heterogeneity including high and low K layers within the saturated and unsaturated zones compared to the true stratigraphy visible in the sandbox, as well as reasonable distribution patterns of α and θs for the Gardner-Russo's model. The estimated tomograms are then used to predict drawdown responses of pumping tests not used in the inverse modeling effort. The simulated and observed drawdown curves show an excellent agreement for observations in both the saturated and unsaturated zones. Drawdown predictions of the geostatistical inversion approach are significantly better than those based on the homogeneous assumption. Results of this study demonstrates the robust performance of HT that considers variably saturated flow processes in unconfined aquifers and the unsaturated zone above it, and substantiate the unbiased and minimal variance of HT analysis with the SLE algorithm. Then, this dissertation investigates the importance of geological data in HT through sandbox experiments. Four geological models with homogeneous units are constructed with borehole data of varying accuracy.These geological models are calibrated to multiple pumping test data of two different pumping and observation densities. Results show that both accurate and inaccurate geological models can be well calibrated and inaccurate geological models yield poor drawdown predictions for model validation. Moreover, model calibration and validation comparisons among layer-based geological models and a highly parameterized geostatistical model show that the performance gap between the approaches decreases as the number of pumping tests and monitoring locations are reduced. Next, four geological models are populated with permeameter test K values for each layer and used as prior mean information in geostatistical inverse models. Results show that the estimated K tomograms preserve geological features especially in areas where drawdown data are not available. Overall, this sandbox study emphasizes that accurate geological data is important for incorporating into HT surveys when data from pumping tests are sparse. Finally, this dissertation looks into the importance of geological data in HT through field experiments conducted at a highly heterogeneous glaciofluvial deposit at the North Campus Research Site (NCRS) of the University of Waterloo. Unlike the sandbox study in which the stratigraphy is perfectly known, geological data are obtained from 18 boreholes at NCRS. Two geological models of different resolutions are constructed. One model contains 19 layers while the other model merges some of the units resulting in five layers. Steady state pressure head data of 14 pumping tests are selected from the site for model calibration and validation purposes. The results are first compared with permeameter-estimated K profiles along boreholes. Results reveal that the simultaneous calibration of geological models to seven pumping test data yields K values that correctly reflect the general patterns of vertical distributions of permeameter-estimated K. In addition, this study finds that using a geological model as prior information in the geostatistical inversion approach leads to improved correspondence of K estimates to permeameter test results along wells, as well as in preserving geological features where drawdown measurements are lacking. Therefore, the field study suggests incorporating geological data for HT analysis based on geostatistical inverse modeling approaches when reliable geological data are available.