Study of Ion and Solvent Transport through Graphene Oxide Membranes 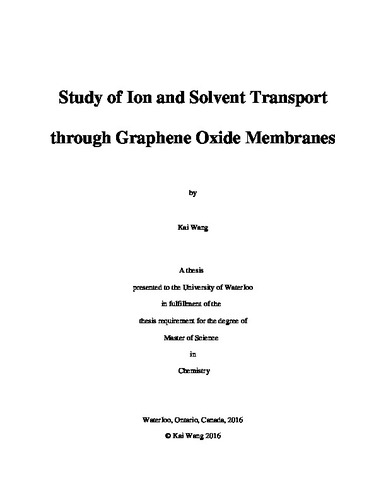 Filtration membranes are required to be thin, robust, energy efficient, and accurate on selectivity. Graphene oxide (GO) is believed to be a potential next generation material for industrial membrane applications because of its unique properties such as strong mechanical strength, excellent aqueous solution processability, and great flexibility for membrane fabrication. Research on the transport models, the separation performance, and the functionalization of GO membranes has been developed. However, many mechanisms of mass transport through GO membranes still remain debatable. In this work, GO was synthesized, and then functionalized with linear amine-terminated poly(ethylene glycol) (PEG) and aluminum ions (Al). The fabrication and characterizations of GO, PEG-GO, and Al-GO membranes were demonstrated in this work. Water and water/ethanol binary mixture transport through GO, PEG-GO, and Al-GO membranes were studied to investigate the permeation and the rejection rates of solvents through GO-based membranes. The total volumetric flux of water/ethanol mixture through GO membranes was inversely proportional to the viscosity of the solvent mixtures. The steric hindrance effect and the interactions between the solvent molecules and the membrane surfaces dominated the rejection rate of ethanol through GO membranes. The functionalization of GO modified the pore size and the porosity of the membranes, resulting in faster permeation of solvents and reduced rejection rates of ethanol through PEG-GO and Al-GO membranes. Deformation of nanochannels within the functionalized GO membranes was observed when the membranes were operated under highly pressurized conditions. Diffusive transport of two charge equivalent and structurally similar ruthenium complex ions Ru(bpy)32+ and iv Ru(phen)32+ through GO, PEG-GO, and Al-GO membranes were also studied. Our data showed high similarity with the results reported previously in the literature, indicating that the GO and functionalized GO membranes used in this work were highly consistent. Due to the enlarged pore sizes and the reduced interactions between ions and the membrane surfaces, the flux of ions through PEG-GO membranes was 300% higher than that through GO membranes. In contrast, permeation of ions through Al-GO membranes was slower than that through GO membranes. The blocked nanopores and the electrostatic repulsion between the intercalated aluminum ions and complex ions were the main reasons for this observation. In addition, the main reason for the significant permeance difference between Ru(bpy)32+ and Ru(phen)32+ ions was confirmed as the steric hindrance effect. This work contributes to the basic research on GO membranes in potential applications. It can be beneficial to the academic laboratories for understanding the mechanism of mass transport through GO-based membranes. These new membrane materials could replace traditional membrane materials in many industrial applications in the future.