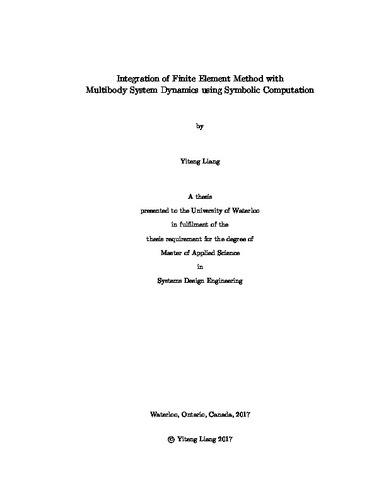 A general procedure integrating the finite element method with multibody system dynamics using symbolic computation is presented. It takes advantage of both the nodal formulation and the graph-theoretical approach, so it avoids the tedious modal analysis and can automatically reduce the number of system equations. The validity and expected performance are demonstrated mathematically and philosophically, which are tested by several general examples. A flexible beam is created with a finite element formulation, which is derived according to the classical Bernoulli-Euler beam theory. A comprehensive procedure of deriving kinetic and kinematic equations for the flexible beam is provided, which starts from inspecting the diversity of shape functions to the generalization of inertia and elastic terms. The geometrical nonlinear formulation is revisited and specifically developed for the symbolic integration, and explicit expressions that are rare in existing publications for geometrical nonlinearity are derived for three-dimensional applications. A detailed process is described for the transformation of the equations of motion of the finite-element flexible beam to a form required by the graph-theoretical approach. The beam model is implemented in MapleSim (a multi-physics simulation environment based on symbolic computation and graph theory) and made compatible with other multibody components in its library. Example problems are shown to validate the functionality of the implemented model. The dynamic stiffening effect due to geometrical nonlinearity is explicitly explained with its significance especially in fast and large overall-motion problems. Comparison results also show that the nodal approach shows great potential using the symbolic computation, which runs 70% faster and is more convenient to manipulate than the modal approach. The general procedure of the finite element formulation for the flexible beam can be followed to derive proper formulations of plate and solid elements if using appropriate displacement field assumptions, and the transformation to graph-theoretical equations is also similar.