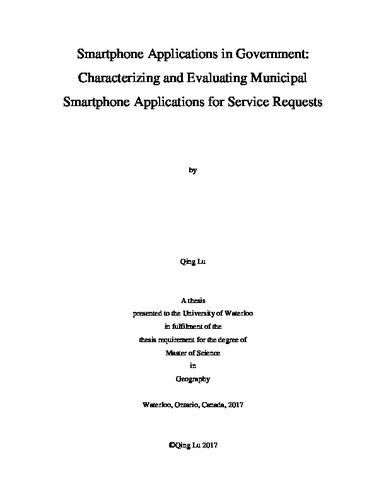 Using advanced information and communication technologies to deliver information and services, which is referred to as e-government, is trending at different levels of governments. Through the evolution of web technologies from Web 1.0 to Web 2.0 along with the emergence of wireless Internet, e-government has also developed with growing benefits for both governments and citizens. Although a number of previous studies explored promises and challenges of e-government, a majority of them are rhetoric and focus on non-mobile e-government, and there is a gap in understanding actual uses of smartphone applications in the public sector. This research aims to fill the gap by studying 311 mobile applications adopted by some municipalities in Canada. 311 service, which is originally a direct call line that allows citizens to report issues and access non-emergency municipal services, is now offered via multiple platforms such as smartphone applications. These smartphone applications can be seen as a new practice of mobile e-government or m-government. Semi-structured interviews were conducted with six municipalities that provide multiple channels for citizens to make non-emergency service requests. Although smartphone applications have not been adopted for a long time in governments, participating governments are satisfied with the current use and have observed a number of advantages by comparing with other communication channels. The identified advantages imply potentials to promote a more open government by increasing efficiency, transparency and citizen engagement. A detailed characterization of multiple channel was obtained by looking into 311 records in one of the interviewed municipalities – the City of Edmonton. Three years of request data were analyzed by comparing relative share of service request for each channel and by extracting the spatial patterns of the requests. A regression model was also built to explore the relationships between channel use and sociodemographic variables. The analysis results show a shift in channel usage from traditional to Internet-enabled channels, and that specific digital inequalities exist reinforcing distinctions between traditional and Internet-enabled channels. Based on the results obtained, recommendations are provided to governments to further exploit advantages of smartphone applications in delivering government-related services.