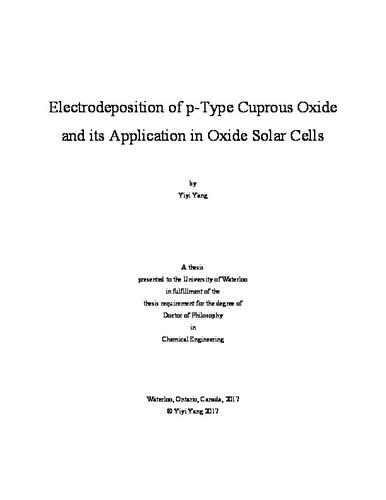 Cuprous oxide (Cu2O) is a promising material for the fabrication of oxide solar cells due to its abundance, nontoxicity, stability and ability to be deposited under mild conditions. At the moment, the reported efficiencies for Cu2O-based solar cells are well below its theoretical limit and most of the high performance devices are fabricated using energy-intensive processes. Electrodeposition of Cu2O thin films is a well-known process although a systematic study of the dependence of Cu2O film properties on the deposition conditions has not been reported, especially in the context of photovoltaic applications. The purpose of this study is to optimize the electrodeposited p-type Cu2O film properties for the application in heterojunction solar cells through the manipulation of electrodeposition conditions. A range of Cu2O morphologies are formed by varying the parameters during the constant potential deposition of Cu2O thin films from a copper-lactate electrolyte including applied potential, temperature, pH, copper concentration and lactate concentration. The variation in morphology is mostly attributed to the relative growth rates of <111> and <100> orientations. It is found that the variation in growth orientation is mostly due to the relative rates or reaction and transport. When reaction kinetics is the limiting factor, <100> growth is preferred when the conditions are close to thermodynamic equilibrium. On the other hand, when transport limitation in the system is significant, <111>-oriented growth and cubic grains are favored as the surface concentration of CuLac2 is reduced. In other conditions, mixed orientations tend to be formed. Evidence of adsorption of lactate ions onto the (111) faces is also observed, promoting <100> directed growth at high lactate concentration. In addition, significant evidence of film dissolution during deposition is observed at high electrolyte pH of 13 and above. The performance of Cu2O thin films in photovoltaic devices is evaluated using an FTO/Cu2O/AZO cell structure. It is found that the electrolyte pH has the most prominent effect on the device performance among different electrodeposition parameters. Performance variables including JSC, VOC and FF all improve significantly as the Cu2O deposition pH increases. An optimal cell efficiency of ~1.55% is obtained using Cu2O thin films deposited at a high pH of 13.4, which exceeds the majority of previously reported efficiencies using the same deposition technique. The reason for the improved efficiency is attributed to the dissolution and reformation of Cu2O grains during deposition at high pH through the improvement of charge carrier mobility and band gap in the Cu2O layer. Film orientation of Cu2O also plays a minor role in cell efficiency. Alternative electrodeposition procedures are investigated. Galvanostatic deposition is found to be less suitable than potentiostatic deposition for solar cell fabrication due to the difficulty in controlling Cu metal content in the film. Evidence of dissolution by oxidation is observed under both pulsed and stirred conditions. Different morphologies to the typical polyhedral shapes with higher carrier concentration and low carrier mobility are obtained in both cases. These effects are attributed to the lowering of diffusion limitations during the deposition process either by allowing more time for transport or by increasing transport rate. These processes result in lower device performance compared to potentiostatic deposition under similar conditions. Finally, FTO/Cu2O/ZnO devices are fabricated by depositing ZnO onto electrodeposited Cu2O layer through a seed-layer assisted chemical growth method in zinc nitrate-HMTA solution. Ordered ZnO nanorods are obtained using this technique and their dimensions can be controlled by adjusting bath compositions. Smooth ZnO thin films with no pin-hole defects are obtained although the performance of Cu2O/ZnO devices is not as high as devices with AZO layers.