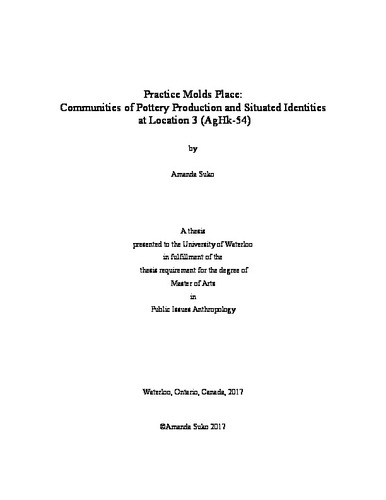 The archaeological study of Late Woodland communities in southern Ontario has identified two spatially and culturally distinct manifestations known as the Western Basin and Ontario Iroquoian Traditions. Recently, the emergence of sites along an interstice between these two manifestations has invited study of the potential for socio-material syncretization within such a ‘borderland’ context. Given such circumstances in the contemporary present, multiple descendant groups in the province may wish to exercise stewardship over such sites and the materials contained therein. As discussed in Chapter One, I interviewed select members of the Bkejwanong and Six Nations communities in order to generate Indigenous insights and comment on the appropriate ethical standards and a framework for the Indigenous stewardship of archaeological resources. Furthermore, in Chapter Two, this study adopts the coupling of materiality theory and the communities of practice approach, along with an attribute-based analysis of pottery form and decoration in discussing communities of practice and notions of identity at Location 3, a thirteenth century ‘borderland’ site near Arkona, Ontario. I suggest this site was inhabited by newly configured, mobile potting communities who perceived vessel production as a field of co-participation and learning. This, in turn, resulted in the emergence of situated social identities and notions of place, along with the materialization of a short-lived, localized design repertoire composed of combined elements from neighbouring potters.