"The Ultimate Goal is the Best Health Possible": Exploring Collaborations Between the Food Safety and Food Security Sectors in British Columbia, Canada 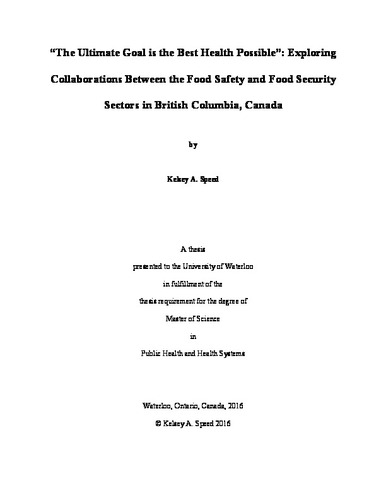 Introduction: In Canada, foodborne disease and food insecurity are both important health issues that share many common drivers. However, the public health sectors that aim to address each of these issues typically work separately from each other. Despite the silo-ing of the two sectors, British Columbia has many examples of successful collaborations, and therefore is an excellent setting to explore collaborations between the two sectors. Thus, the objectives of this thesis were to: (i) identify examples of the intersection of food safety and food security efforts in public health practice; and (ii) explore facilitators and barriers for collaborations between public health practitioners of the food safety and food security sectors. Methods: Semi-structured interviews were conducted with 14 public health practitioners working in the food safety and food security sectors in British Columbia, and qualitative analyses were conducted to identify examples of intersections between the two sectors, as well as factors that influence the success of collaborations between practitioners of the two sectors. Results: Participants identified four key ways that the two sectors intersect. They identified ways in which their daily practices could be helped or hindered by the activities of the other sector, including because of historically disjointed policies that do not consider multiple health outcomes related to food, and because specific types of food products, such as fresh produce, can be considered either risky or beneficial depending on the perspective taken. Finally, they recognized that both sectors are working towards the same overall goal of improved population health, albeit using slightly different lenses. In addition to the ways that the two sectors intersect, participants identified many examples of factors that influence the success of collaborations between practitioners of the two sectors, including many factors that could be considered facilitators when present and barriers when absent, and other factors that could be considered both facilitators and barriers, depending on the perspective through which the factor was viewed. These factors were as follows: personal connections with those in the other sector, and to those who have already successfully collaborated; purposeful engagement with different types of people who bring value; openness to, and understanding and valuing, the goals, outcomes and restrictions of the other sector; creative, realistic, and solutions-oriented problem solving targeted to desired outcomes; and recognizing that the issues are connected, and actively work with that in mind. One factor, believing that one position is more important than the other due to its external importance or legitimacy, was identified as exclusively a barrier to collaboration. Finally, participants identified broader environmental factors that needed to be recognized as influencing the success of collaborations, but that collaborations could proceed in spite of when there were other facilitators in place. Conclusion: In British Columbia, the food safety and food security sectors, and the health issues they aim to address, are intimately connected to each other. It is therefore important that practitioners of the two sectors work together when developing and implementing public health efforts to address their respective health issues, in order to reduce the potential negative impacts they may have on the health outcome of the other sector. To this end, participants discussed factors that could inhibit or facilitate collaboration between practitioners of the two sectors, as well as specific ways that practitioners of the two sectors can better support successful collaboration with the other sector, in their quest to achieve the best possible health of the population of British Columbia.