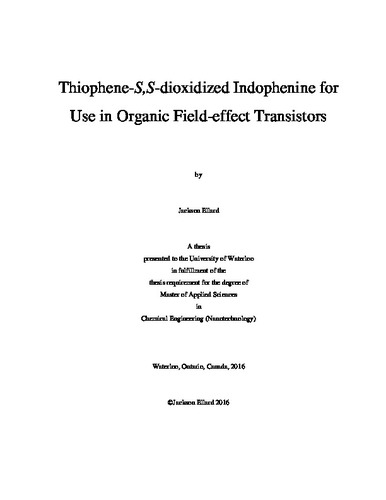 To address the need for better n-type organic semiconductors, thiophene-S,S-dioxidized indophenine (IDTO) was developed. IDTO is a planar quinoidal molecule with deep energy levels which facilitate stable and efficient electron transport. IDTO is a promising material in the design and fabrication of high performance n-type organic field-effect transistors because it offers simple synthesis, as well as excellent processability and good performance. The work presented in this thesis follows the development of IDTO and its various uses in organic field-effect transistors. Firstly, the synthetic method for IDTO was systematically improved. Two important factors were improved, safety was improved by replacing the solvent, benzene, with the much less hazardous toluene and the yield of the synthesis was increased from less than 10% to ~40%. Next, IDTO and two derivatives (5- bromo-IDTO and 6-bromo-IDTO) were synthesized and evaluated as new n-type small molecule organic semiconductors. The three compounds all exhibited unipolar n-type characteristics in the range of 10-2 to 10-1 cm2V-1s-1. The highest electron mobility of 0.11 cm2V-1s-1 was measured for 6- bromo-IDTO. IDTO was then utilized as an electron accepting building block for the synthesis of two donor-acceptor polymers: PIDTOBT and PIDTOBTz. Both polymers showed unipolar n-type performance with electron mobilities on the order of 10-2 to 10-1 cm2V-1s-1. PIDTOBT had the highest electron mobility of 0.18 cm2V-1s-1 after annealing at 200 °C. From the small molecule and polymer results, it is clear that IDTO is a promising material for unipolar n-type organic semiconductors. Since IDTO has a strong electron accepting feature, it was thought that IDTO would have another use as an electron trap. By blending IDTO with an ambipolar polymer that has a LUMO energy level above that of IDTO; electron transport could be suppressed under the correct conditions. The three small molecule IDTO compounds were blended with PINDFBT (TT) and PINDFBT (HH) to investigate the electron trapping ability of IDTO. Complete suppression of electron transport was not observed but the overall trend agreed with the theory. 6-bromo-IDTO having the lowest LUMO energy level showed the strongest electron trapping effect while IDTO had the weakest effect due to its higher LUMO energy level. This thesis provides a comprehensive study of the development and application of the novel material, IDTO.