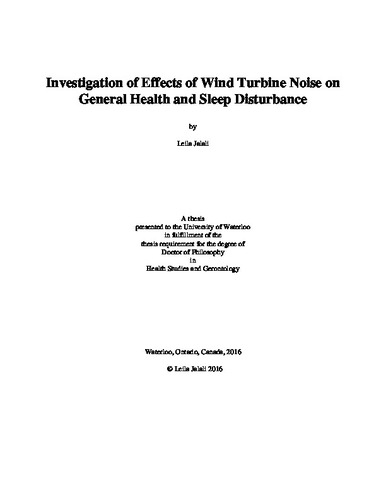 ABSTRACT Background: Although wind energy is now one of the fastest growing sources of power in Canada and many other countries, the growth in both number and size of wind turbines (WTs) has raised questions regarding potential health impacts on individuals who live close to such turbines. Suspected health-related effects of exposure to WT noise have attracted much public attention, with symptoms such as sleep disturbance reported by residents living close to wind energy developments. Objective: The overall objective of this study was to better understand and investigate the association between WT noise exposure and self-reported and objective measures of sleep and general health in nearby residents. Methods: This thesis consists of four studies: 1) a narrative review of the literature pertaining to general health and sleep effects related to WT noise, 2) a health and quality of life (QoL) field study exploring changes in QoL by using standard scales, 3) a sleep survey study evaluating self-reported sleep quality of residents by standard and validated sleep questionnaires, and 4) an objective sleep and noise study that included polysomnography and inside noise measurements during two consecutive nights. Participants also completed sleep diaries over a one week period. The field studies employed a prospective cohort design, with two data-collection times: before and after WT operation. Results: The literature review was intended to examine the peer-reviewed literature regarding evaluations of potential health effects such as degraded QoL, annoyance, and sleep disturbance among people living near WTs. Of 200 relevant articles, 30 articles (reporting on 11 cross-sectional studies) investigated a relationship between WTs and health, and fulfilled the inclusion criteria. The evidence, found in the review, was judged to be not sufficient to establish a cause-and-effect relationship. To address the limitations in existing research, it was recommended that a prospective study, with objective sleep and noise measurements before and after operation of WTs, be conducted. In the health and QoL study, the mean values for the Mental Component Score of SF12 (p<0.001), Satisfaction with Life Scale (p=0.002), Wind Turbine Syndrome Index (p<0.001), and Canadian Community Health Survey- Satisfaction with Life (p=0.048) significantly worsened after WT operation. These results were strongly associated with concerns about property values, attitude to WTs, noise sensitivity and visual and noise annoyance. In the subjective sleep study, the mean scores of the Pittsburgh Sleep Quality Index (PSQI), Epworth Sleepiness Scale (ESS) and Insomnia Severity Index (ISI) significantly increased. Changes in PSQI scores over time were strongly associated with negative attitudes to WTs, turbine visibility, and concerns about property values. Changes of ISI scores were also strongly related to property devaluation concerns and negative attitudes to WTs. No major differences were found in the objective sleep data of participants in terms of the effects on whole-night sleep parameters, sleep discontinuity, sleep quantity, and sleep efficiency. The reported effects on sleep, obtained by sleep diaries, support the findings from polysomnography in regards to sleep quantity. The average A-weighted noises measured in Time1 (T1) and Time2 (T2) observations were not significantly different, with means of 36.55 dB(A) (SD=4.18) in T1 and 36.50 dB(A) (SD=4.20) in T2 for Total Time in Bed (TIB) (p=0.959). The average Z-weighted sound pressure levels measured in T1 and T2 observations were also not significantly different, with means of 63.78 dB (Z) (SD=25.75) in T1 and 61.93 dB (Z) (SD=36.07) in T2 for TIB (p=0.218). Conclusions: The results of this study based on advanced sleep recording methodology together with extensive noise measurements, in an ecologically valid setting, cautiously suggest that there are no major changes in the sleep of participants newly exposed to WTN. Results of the subjective data provide evidence for the role of individual differences and psychological factors in reports of sleep disturbance and degraded QoL by people living near WTs.