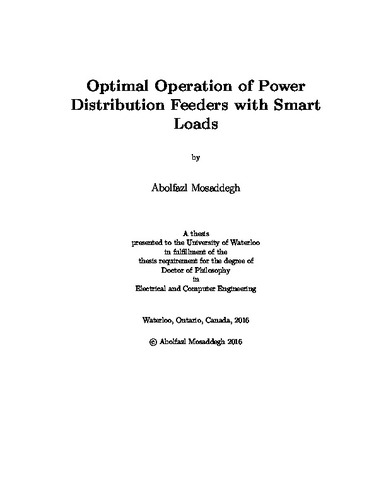 Distribution systems have been going through significant changes in recent years, moving away from traditional systems with low-level control toward smart grids with high-level control, with improved technologies in communications, monitoring, computation, and real-time control. In the context of smart grids, Demand Response (DR) programs have been introduced so that customers are able to control and alter their energy consumption in consideration with distribution system operators, with benefits accruing to both customers and Local Distribution Companies (LDCs). This thesis focuses on the integration of DR with the intelligent operation of distribution system feeders. Thus, it proposes a mathematical model of an unbalanced three-phase distribution system power flow, including different kinds of loads and other components of distribution systems. In this context, an unbalanced three-phase Distribution Optimal Power Flow (DOPF) model is proposed, which includes the models of lines, transformers, voltage-based loads, smart loads, Load Tap Changers (LTCs), and Switched Capacitors (SCs), together with their respective operating limits, to determine the optimal switching decisions for LTCs, SCs, and control signals for smart loads, in particular, Energy Hub Management System loads and Peaksaver PLUS loads. Hence, Neural-Network-based models of controllable smart loads, which are integrated into the DOPF model are proposed, developed, and tested. Since the DOPF model has different discrete variables such as LTCs and SCs, the model is a Mixed-Integer Non-Linear Programming (MINLP) problem, which presents a considerable computational challenge. In order to solve this MINLP problem without approximations and ad-hoc heuristics, a Genetic Algorithm (GA) is used to determine the optimal control decisions of controllable feeder elements and loads. Since the number of control variables in a realistic distribution system is large, solving the DOPF for real-time applications using GA is computationally expensive. Hence, a decentralized system with parallel computing nodes based on a Smart Grid Communication Middleware (SGCM) system is proposed. Using a "MapReduce" model, the SGCM system executes the DOPF model, communicates between the master and the worker computing nodes, and sends/receives data amongst different parts of the parallel computing system. When large number of nodes are involved, the SGCM system has a fast performance, is reliable, and is able to handle different fault tolerance levels with the available computing resources. The proposed approaches are tested and validated on a practical feeder with the objective of minimizing energy losses and/or energy drawn from the substation. The results demonstrate the feasibility of the developed techniques for real-time distribution feeder control, highlighting the advantages of integration of smart loads in the operation of distribution systems by LDCs.