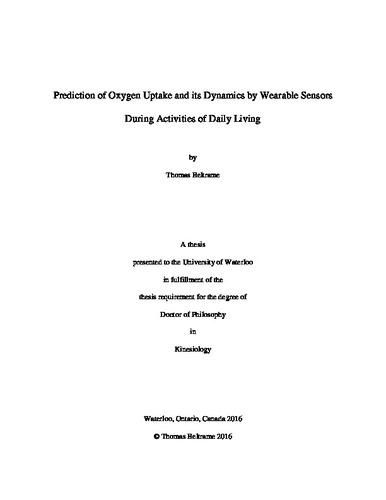 The evaluation of the aerobic response to a new energetic demand provides valuable information regarding the functional capabilities of the aerobic system. Abnormal, or impaired aerobic responses may occur before the clinical detection of degenerative disease states, demonstrating a need for the development of tools for the continuous assessment of aerobic system dynamics in real-life scenarios. Current wearable technologies are commonly used to quantify physical activity levels; however, the big data streamed from these devices offer the unique possibility to predict the oxygen uptake (VO2) dynamics during unsupervised activities of daily living (ADL) when calorimetry techniques are not accessible. The evaluation of VO2 dynamics has been associated with physical fitness and might provide insight into changes in health status. The main objective of this thesis was to predict and evaluate the temporal dynamics of the aerobic response during realistic activities. To accomplish this, a series of seven studies that began with observations of VO2 dynamics under standard laboratory conditions, progressed to specified patterns of over-ground walking, and concluded with unsupervised ADL facilitated the development of novel techniques for aerobic system analysis during walking and ADL based on wearable sensors. The variables derived from the wearable sensors were used to create a VO2 predictor based on different machine learning approaches. Predicted VO2 was individually validated by Bland-Altman plot and Pearson’s linear correlation coefficient (r). The VO2 dynamic analysis included Fourier transformations, exponential data modeling, and a novel approach derived from the mean normalized gain amplitude (MNG in %). This new indicator of VO2 dynamics correlated strongly with the standard method obtained, in the same subjects, from a step change in work rate on the cycle ergometer, and with the classical indicator of fitness, maximal VO2. The results showed the strong ability of the proposed algorithms to predict VO2 during ADL based on wearable sensors allowing for not only overall assessment of metabolic rate but also for successful prediction of VO2 dynamics. Thus, the proposed VO2 predictor in conjunction with MNG can be used to investigate aerobic fitness during ADL with direct applicability for the general population. This new technology provides a significant advance in ambulatory and continuous assessment of aerobic fitness with potential for future applications such as the early detection of deterioration in physical health.

Thomas Beltrame (2016). Prediction of Oxygen Uptake and its Dynamics by Wearable Sensors During Activities of Daily Living. UWSpace. http://hdl.handle.net/10012/11133