Does intersex matter? A case study of rainbow darter in the Grand River 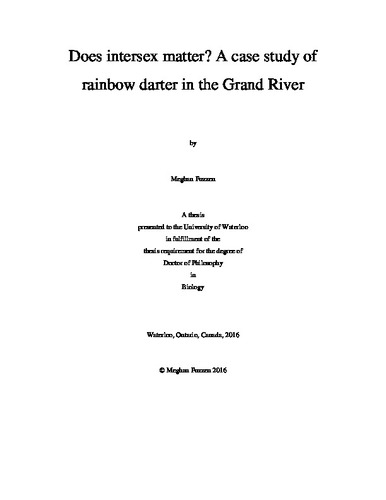 Endocrine disrupting compounds (EDCs) are present in the environment and can have negative effects on the health of wildlife. Aquatic organisms residing near the outfalls of municipal wastewater effluent (MWWE) are chronically exposed to EDCs, including natural hormones, pharmaceuticals, and industrial chemicals. The vulnerability of aquatic organisms to these compounds is due to the evolutionary conservation of endocrine systems. Although numerous studies have indicated that compounds in MWWE including estrogenic and anti-androgenic contaminants, feminize male fish, it is still uncertain what the consequences of feminization of male fish are. Research on this topic since the early 1990’s has demonstrated that a multitude of compounds in MWWE are capable of binding to estrogen receptors in fish. Key biomarkers of estrogen exposure are the elevation of vitellogenin protein and gene expression levels, as well as the presence of female tissue in male gonads; a condition referred to as intersex. The feminization of male fish and intersex condition has been noted in populations of fish around the world including rainbow darter (Etheostoma caeruleum) in the Grand River, Ontario, Canada. Male rainbow darter collected from sites near MWWE outfalls have intersex condition as well as impaired androgen production and sperm development. The aim of the studies in this thesis was to assess the implications of feminized males using rainbow darter as a model. Several questions were addressed through field and laboratory studies. The first question addressed was whether exposure to MWWE, and intersex in particular, reduced the reproductive success of rainbow darter. To test this, fish were collected in the field during the spawning season, gametes were stripped, and manual fertilizations conducted at each of several sites. Fertilization success and embryo survival were lower at sites downstream of a MWWTP outfall when compared to a rural reference site. Additionally, when grouped into categories based on the severity of intersex (based on number and development of oocytes in testes), it was found that the most severely affected males had the lowest fertilization success. In contrast, no relationship was found between embryo survival and intersex severity, suggesting that egg quality may play a larger role in the survival of embryos. This study concluded that severe intersex condition, which is a marker of MWWE exposure, was an indicator of poor reproductive success in male rainbow darter. The second question addressed in this thesis was whether reproductive behaviour was altered in fish exposed to MWWE. To test this, rainbow darter were collected from sites in the Grand River along an urban gradient and two separate experiments conducted. The first experiment was a breeding competition experiment where three males, each from a different site, were placed into a spawning tank with a single female from either a reference or MWWE exposed site. Reproductive behaviour of both male and female rainbow darter collected near MWWTP outfalls were impaired. Males spent less time guarding the spawning area and females performed fewer nose digs. Both behaviours are important for reproductive success. The second experiment in this study assessed the response of males to a mirror-competitor. Males with severe intersex condition spent less time performing aggressive acts than males with no intersex condition. From these findings, this study concluded that MWWE exposure, as indicated by intersex severity in the second experiment, alters reproductive behaviour of rainbow darter and would likely lead to reduced reproductive fitness in the wild. The third study in this thesis tested whether observations of impaired reproductive success and behaviour are directly associated with MWWE as opposed to other urban stressors. In this study, male and female rainbow darter were collected from a reference site during the pre-spawning period and placed in breeding groups. Following a 10-day pre-exposure spawning period, rainbow darter breeding groups were exposed to 1 of 5 treatments (control, 17α-ethinylestradiol (EE2, a synthetic estrogen), 1%, 10%, or 20% MWWE) for 21 days. After the 21-day exposure, male behaviour was assessed in a mirror-competitor test. Fecundity (number of eggs) was lower in the highest (20%) dose of MWWE during the first week of the exposure but was comparable to other groups for the remainder of the experiment. Fertilization success was also lower during the exposure period compared to the pre-exposure period in MWWE exposed and EE2 exposed fish. Males exposed to 20% MWWE were less aggressive and more active than the control group. Although the responses of this experiment were less dynamic than those observed in fish exposed in the wild, they corroborated the findings that rainbow darter exposed to MWWE have reduced reproductive fitness. The final study in this thesis addressed the issue of repeatability of field studies of feminized males by comparing the variability of biological measures between fall and spring seasons among five years of collections as well as across levels of biological organization. Measures were most consistent in males collected during the fall. Additionally, measures at the tissue level, including sperm development and intersex incidence and severity, were the most consistent measures among years and seasons. This study concluded that the use of multiple biological measures from several levels of biological organization allowed for the same conclusion to be made about the reproductive health of rainbow darter in all years and both seasons of field collections. Throughout these studies, intersex was found to be one of the most reliable markers of exposure to endocrine disrupting compounds in municipal wastewater effluent. Additionally, from the sum of these studies, it can be concluded that highly prevalent and severe intersex in a population of fish indicates poor reproductive fitness. Whether this results in reduced population size or decreased genetic diversity is not known and is an important topic for future studies.