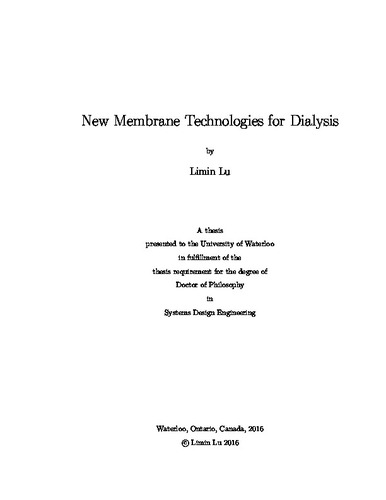 Hemodialysis, developed in 1960s, has served as a treatment for patients with end stage renal disease. However, the 5 year mortality rate of hemodialysis patients is 65%. Research shows that some protein-bound toxins, which cannot to be cleared by hemodialysis, play an important role in mortality of hemodialysis patients. In order to improve the mortality rate of hemodialysis patients, we created a new type of hemodialysis membranes, which can remove more toxins than current hemodialysis membranes. In this thesis, we first adopted electrospinning technology to synthesis hemodialysis membranes with adsorptive nanoparticles. Polyacrylonitrile-zeolite nanofiber composite membranes were fabricated and their ability to adsorb water soluble uremic toxins was tested. The results show that both the free zeolite powder and membranes with zeolite can adsorb creatinine at high level and fast speed. The creatinine adsorption level of 940-zeolite powders is 25423 μg g-1 in 625 μmol L-1 creatinine solution. 0.025 g of 940-zeolite powders can eliminate 91% of 2 μmol creatinine in 5 min. In order to choose good zeolites, we also carried out experiments to study how their size and shape influence the creatinine uptake level. Spherical micro-particle 840, spherical nanoparticle P-87 and rod-like nanoparticle P-371 zeolites were tested. Experiments show that the zeolites have similar creatinine uptake ability as powders. However, they have significantly different creatinine uptake ability after being incorporated inside the membranes. Micro-particle and sphere-shaped particles perform better inside the membranes. Although the membranes we fabricated through electrospinning can adsorb water soluble toxins, their pore size is too large for hemodialysis. In another part of the thesis, we used spin-coating technologies to synthesize polyethersulphone zeolite composite membranes with suitable pore size. Experiments showed that these membranes can adsorb 4948 μg creatinine per g membranes. The effects of pH and salt on zeolite's adsorption and desorption of creatinine were also studied in order to infer the membrane's adsorption mechanism. We found that acidic environments enhance zeolite's creatinine adsorption while alkaline environments weaken it. The existence of various cations also decreases zeolite's creatinine adsorption. Finally, we tested the adsorption of protein-bound toxin by our membranes. Studies have shown that these toxins are related to the progression of chronic kidney disease (CKD), and to the generation and aggravation of cardiovascular disease. Indoxyl sulfate, an important toxin in causing reno-cardiovascular syndromes, was chosen as a representative of protein-bound toxins. Experiments show that zeolite-PES membranes can adsorb 550 μg indoxyl sulfate per g membranes, and indicate that the adsorption mechanism is likely to be electrostatic attraction.