“That’s Gold, Jerry, Gold!”: The Sophisticated Contradiction at the Heart of Stand-Up Comedy 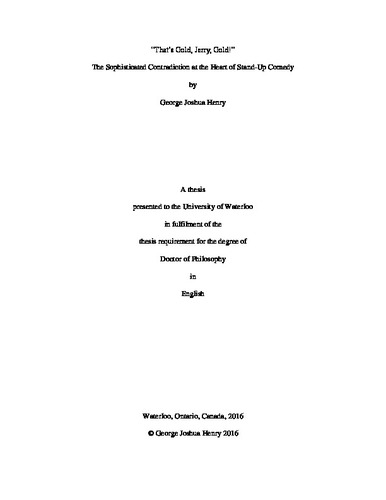 This dissertation examines the word “sophisticated” by re-situating it within the Greek tradition and explicating how such a move informs a study of humor and amusement. In regard to “techniques and theories,” the OED suggests the word sophisticated can be used to mean “highly developed” and “employing advanced or refined methods,” but also “not plain, honest, or straightforward,” and “containing alterations intended to deceive.” In other words, as a discourse descriptor, “sophisticated” can be taken complimentarily to mean complex, intricate, and worldly-wise, but also disparagingly to mean deceptive, misleading, and superficially-wise. The opposition between these meanings illustrates the central idea of this study—that what lies at the heart of both sophistic rhetoric and amusement is contradiction: a state of tension in which “incompatible things” are held together “because both or all are necessary and true” (Haraway). In the context of contemporary North American stand-up comedy, this dissertation links sophistic rhetoric and humor theory such that they mutually support each other, gain meaning, and become more approachable. Defined as an orientation to contradiction, sophistic rhetoric provides a way to theorize humor, while the universal phenomenon of amusement provides justification for theorizing a thing called “sophistic rhetoric.”