Temporal Dynamics in the Interpersonal Behaviour and Perceptions of Romantic Partners 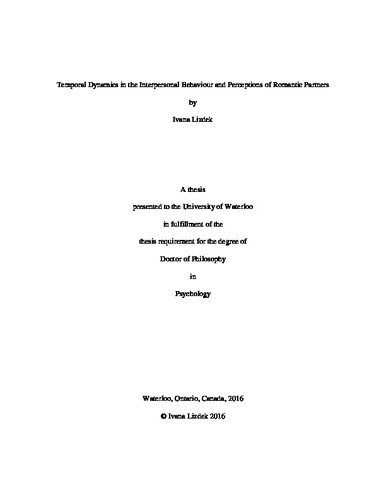 The current study investigates romantic partners’ perceptions of their own and their partner’s interpersonal behaviour as they unfold continuously over the course of an interaction. In particular, we examine the types of biases that affect partners’ perceptions of themselves and each other. Using a joystick-based assessment program, 59 romantic couples rated moment-to moment fluctuations in dominance and affiliation in themselves and their partners as they watched a video of their own behaviour in a previous, relatively unstructured collaborative task. To provide a benchmark of comparison, independent observers applied the same coding technique to provide continuous ratings of behaviour for each participant. Partners also completed several paper-and-pencil measures, which tapped their levels of trait dominance and affiliation, as well as other characteristics of each person and their relationship. Joystick data for both participants and observers were used to calculate overall (mean) and moment-to-moment indices of dominance and affiliation. Indices were also derived across partners for overall and moment-to-moment reciprocity and correspondence. Findings for overall levels of dominance and affiliation suggest that partners’ perceptions reflected several types of bias. For instance, apart from the presence of the well-established positivity and projection biases, our results for perceptions of one’s partner’s dominance revealed a presumed reciprocity bias in which the partner was perceived to have behaved in a manner more opposite to one’s own overall level of dominance than was actually true. Nonetheless, we found that such biases occurred in the context of considerable accurate understanding in perceptions of oneself and one’s partner. At the moment-to-moment level, findings revealed that partners were able to reliably track interpersonal behaviour for both targets as it was unfolding continuously across time. However, large individual differences in partners’ moment-to-moment tracking ability emerged. Finally, we demonstrated that partners’ interpersonal behaviours and perceptions were related to relationship satisfaction in important ways. Specifically, partners’ overall affiliation during the task and the extent to which their affiliation levels matched each other were related positively to relationship satisfaction. In addition, partners who were able to pass control skillfully throughout the course of the interaction, a phenomenon termed reciprocity, reported being more satisfied. Similarly, couples with greater ability to track moment-to-moment fluctuations in their levels of dominance also reported higher relationship satisfaction.