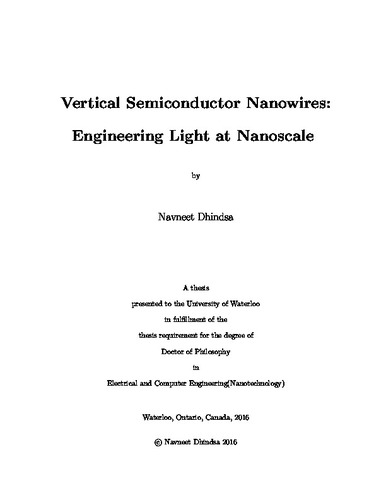 Vertical semiconductor nanowires have gained considerable attention in the last decade for their attractive optical and electronic properties. Their high surface to volume ratio and their ability to confine charge carriers and photons in one dimension has enabled them to be a promising candidate for improved as well as novel devices in nanophotonics and optoelectronics. However, it is necessary to achieve high quality nanowires with controllable features to fully understand and fine-tune the optical properties of the nanowires to achieve desired applications. In this study, various semiconductor materials like Gallium Arsenide (GaAs), Silicon and Amorphous Silicon (a-Si) were chosen to analyze and compare their optical properties using reflection measurements and finite difference time domain (FDTD) simulations. The nature of modal excitations in nanowires with the change in their diameter, pitch, shape and length are understood through simulation studies and verified using the measure- ments. Optical waveguiding, near field coupling, Fabry-Perot modes are comprehensively understood for the first time in the nanowire arrays. The ordered nanowires arrays are fabricated using Inductively Coupled Plasma Reactive Ion Etching (ICP-RIE) and a good understanding of the etching chemistries of chosen materials is achieved to fabricate high aspect ratio (length to diameter ratio) nanowire arrays. For GaAs nanowires, the aspect ratio of up to 73 is achieved with the controlled diameters for the very first time. For a variety of hard masks, etching parameters have been developed to get a good control over the sidewalls, diameters, and shapes of the nanowires. The silicon nanowires etching parameters are modified to achieve different shapes in lateral and longitudinal directions. Lastly, Gallium Nitride (GaN) nanowires are fabricated using chlorine chemistry with nitrogen as a clean passivation gas and wide varieties of masks and their combinations have been tested to achieve vertical morphology. iii Based on the understandings we achieved for the nanowires, a new platform is introduced for a-Si nanowires by etching them on a glass substrate and by integrating thin film with them to achieve the solar weighed absorptance 200-250 % higher than the thin film of the same thickness. Designs for broadband absorption in Gallium Arsenide nanowires are also considered and highest absorption achieved in those nanowires giving solar weighed absorption efficiency as high as 94%. This thesis spans both design of nanowire arrays for various applications, and fabrication and experimental verifications of them. As the comprehensive studies were done on the optical properties of the nanowire, the thesis presents a complete picture of various optical modes and phenomena, which emanate in them due to their interaction with light. It will provide optoelectronics engineers design directions as nanowire devices are considered in the future of commercial applications.