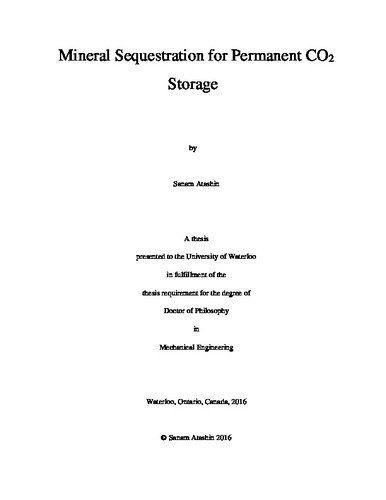 Mineral carbonation is one of the most appealing CO2 emission mitigation techniques capable of storing CO2, in the thermodynamically stable states. However, the technical mineralization process faces serious challenges, in regard to the reaction kinetics and issues with high energy intensity. Pre-activation techniques such as mechanical activation are proposed as effective strategies to enhance the kinetics of mineral carbonation processes. They however, significantly increase the total energy consumption of the processes and hence, optimizing the energy needed for pre-activation process is essential. Mechanical activation technique was performed, using a Uni-Ball-Mill 5. The variation of determinant structural parameters such as particle size, specific surface area, pore volume, crystallite size and crystallinity was recorded as a function of injected milling energy input, using SEM, BET and XRD analysis techniques. Considering the outcomes of this research stage, the optimal level of pre-activation milling energy for the most suggested microstructure for CO2 storage was found to be about 55 kJ/g. Energy optimization and kinetics enhancement was then considered and expanded to the field of reactive compound extraction. Milling energy inputs of 0, 13.8, 27.6, 41.4 and 55.2 kJ/g were injected for the purpose of the reactants’ pre-activation. Solid state extraction was performed under the isothermal conditions of 400, 425 and 450 ̊C in a combined DSC/TGA thermal analyzer device (NETZSCH STA 449F3A-0918-M Jupiter). The trend of activation energy variation vs. milling energy input was calculated and monitored to find the optimal amount of milling energy input needed to produce the structural properties with the lowest amount of activation energy for the solid state extraction process. The calculated amount of optimal milling energy input, to address the objective of this phase of study was found to be about 27.6 kJ/g. This resulted in an almost 34% reduction in the activation energy of MgSO4 solid state extraction. Complimentary to the goal of enhancing the kinetics and performance of the mineral carbonation process, the enhancement of directed anhydrous carbonation was examined as a next stage of research. Two different strategies were followed to address this objective, including the optimization and control of carbonation parameters (temperature and pressure), and the implementation of heterogeneous precipitation, in order to promote the possibility of formation of anhydrous carbonation products during the aqueous carbonation of Mg(OH)2 powders. Carbonation reactions were performed in a 4650 Parr high-temperature high-pressure reaction vessel. Carbonation temperatures of 100, 150 and 200 ̊C and CO2 pressure of 10, 20, 25 and 30 bars, were used. This stage of study confirmed the noticeable influence of carbonation temperature on the formation of anhydrous carbonates, and on the enhancement of directed carbonation. As a continuation, the effects of the implementation of preferred precipitation sites on the efficiency of directed carbonation process was figured out, by injecting two different seeding materials, in the aqueous medium. Hydrophobic activated carbon and hydrophilic alumina seeds were used to bring two different wettability properties. The combined controlling of carbonation parameters and implimentation of more efficient seeding material resulted in an improved carbonation conversion of up to 72%, with an anhydrous carbonate concentration of around 60%.