A survey on Traitor Tracing Schemes 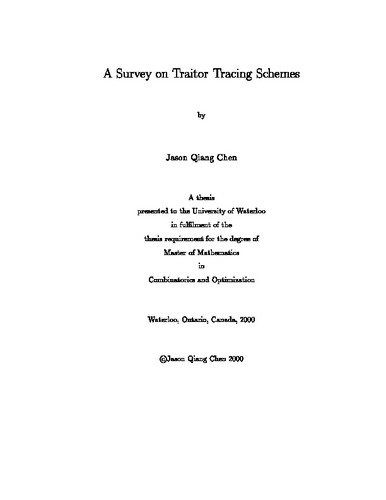 When intellectual properties are distributed over a broadcast network, the content is usually encrypted in a way such that only authorized users who have a certain set of keys, can decrypt the content. Some authorized users may be willing to disclose their keys in constructing a pirate decoder which allows illegitimate users to access the content. It is desirable to determine the source of the keys in a pirate decoder, once one is captured. Traitor tracing schemes were introduced to help solve this problem. A traitor tracing scheme usually consists of: a scheme to generate and distribute each user's personal key, a cryptosystem used to protect session keys that are used to encrypt/decrypt the actual content, and a tracing algorithm to determine one source of the keys in a pirate decoder. In this thesis, we survey the traitor tracing schemes that have been suggested. We group the schemes into two groups: <i>symmetric</i> in which the session key is encrypted and decrypted using the same key and <i>asymmetric</i> schemes in which the session key is encrypted and decrypted using different keys. We also explore the possibility of a truly public scheme in which the data supplier knows the encryption keys only. A uniform analysisis presented on the efficiency of these schemes using a set of performance parameters.