Alikomiak and Tatamigana: Justice and Injustice in the Canadian Arctic 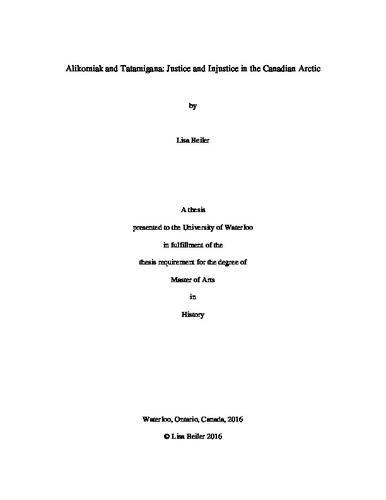 In 1922, two Inuit men—Alikomiak and Tatamigana—were arrested on the Coronation Gulf near Tree River in connection with the killing of six other Inuit. While in Royal Canadian Mounted Police (RCMP) custody, Alikomiak killed the arresting RCMP officer as well as a Hudson’s Bay Company trapper who lived at the post. These killings set off a judicial process that would see both Inuinnait men tried and hanged on Herschel Island, Yukon, in the first criminal trial and execution of Inuit held in the Canadian Arctic. Through a microhistorical analysis, this thesis addresses the following questions: What do the trials of Alikomiak and Tatamigana reveal about the larger social fabric of Inuinnait culture in the early part of the twentieth century? How does Inuinnait culture intersect with the broader social and political imperatives at play in 1920s Canada? After interrogating the wealth of archival evidence (i.e., statements, trial transcripts, correspondence, and ethnographic reports) many salient aspects of Inuinnait culture emerge, including attitudes towards marriage, infanticide, and the role of anger and sanctioned killing in Inuit society. Through an examination of the details of this case, it becomes clear that the Canadian justice system contrasted sharply and clashed with Inuinnait traditional justice. Yet, the story that emerges from the archival documents reveals a nuanced account of contact between Inuinnait and non-Inuinnait as well as Canadian political and sovereignty priorities and the imposition of southern jurisprudence in northern Canada. But importantly, the history of Alikomiak and Tatamigana’s conflict with Canadian law is also a story of the persistence of Inuinnait culture and justice in the North.