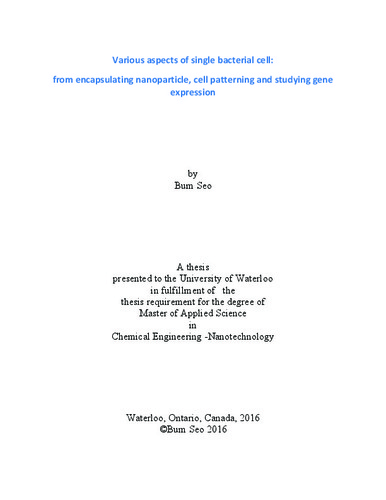 Behaviour of single bacterium have been mysterious for many years due to the technical difficulty and nature of bacteria forming communities. It has not been long since engineers and scientists have started to develop various techniques and devices to study and isolate single bacterium. In the present thesis, three subprojects with a common theme of applying single bacterium cells for engineering application or investigating regulation of gene expressions is introduced. Recently, metal structures with micrometer dimensions have been fabricated and successfully utilized to isolate single bacterial cells with dimensions similar to the designed pillars. First project further develops previously discovered feature of single bacterial cell isolation by metal hollow structures to capture polymeric nanoparticles inside the hollow structures. High achievement rates of filling the nanoparticles inside the structures and subsequently capping the top opening of hollow pillars have been attained. The study demonstrates that the shape of structures affects both the capturing rate and capping rate of nanoparticles. In the second project, a fabrication method and result of simple template to obtain well organized array of single bacterial cells is shown. The bacterial cells with size less than micrometer are patterned on a gold substrate in a uniform matter. The technique developed here requires no additional binding agent nor chemical modification of the substrate which provides an advantage in saving the processing time and cost in comparison to existing techniques developed to isolate single bacterial cells. The isolated bacterial cells are further engineered with magnetic nanoparticles to illustrate bacterial cell wall property remaining the constant after deposition. In the last project, promoter activity of single cells has been analyzed to study the population behaviour of the bacterial culture. In contrast to the assumption that the behaviour of a single bacterium would be identical as a group, the opposite behaviour was found. In the thesis, phenotypic heterogeneity within a promoter that may correlate with the external morphology is shown. During the experiment, two different morphology of cells were observed to exist in a single culture, a short cell and a long elongated cell and the promoter activity correlated with the morphology where the short body ones had higher activity in the promoter compared to the long ones. A fluorescence reporter assays are experimented and evaluated in attempt to reveal the reason behind such heterogeneity.