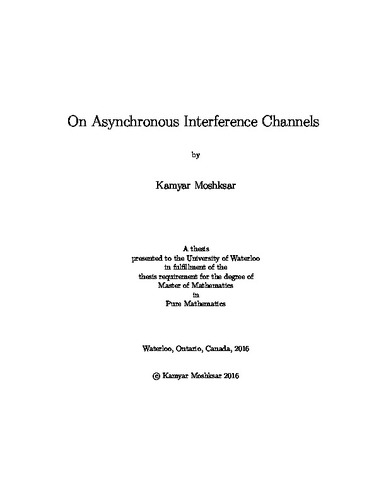 In the first part of the thesis, a decentralized wireless network of separate transmitter-receiver pairs is studied where there is no central controller to assign the resources to the users and users do not explicitly cooperate. For simplicity, we focus on a single-burst scenario where each transmitter sends a single codeword upon activation and remains silent afterwards. Users are block-asynchronous meaning there exists a mutual delay between their transmitted codewords. We show how the receivers learn about the number of active users, channel coefficients and activation times of the transmitters using piecewise linear regression. It is essential that each receiver fi nds the exact arrival time of the codeword sent by its corresponding transmitter. To achieve this goal, preamble sequences are embedded at the beginning of a transmitted codeword. As different users do not necessarily know each other's preamble sequences, there is no guarantee that a receiver can estimate the arrival times of interference bursts along its desired data with vanishingly small probability of error. Nevertheless, the estimates are reliable enough to guarantee successful decoding at each receiver. The second part of the thesis addresses a Gaussian interference channel with two transmitter-receiver (Tx-Rx) pairs under stochastic data arrival (GIC-SDA). Information bits arrive at the transmitters according to independent and asynchronous Bernoulli processes (Tx-Tx~asynchrony). Each information source turns off after generating a given total number of bits. The transmissions are asynchronous (Tx-Rx~asynchrony) in the sense that each Tx sends a codeword to its Rx immediately after there are enough bits available in its buffer. Such asynchronous style of transmission is shown to significantly reduce the transmission delay in comparison with the existing Tx-Rx synchronous transmission schemes. The receivers learn about the activity frames of both transmitters by employing sequential joint-typicality detection. As a consequence, the GIC-SDA under Tx-Rx asynchrony is represented by a standard GIC with state known at the receivers. The cardinality of the state space is $\binom{2N_1+2N_2}{2N_2}$ in which $N_1, N_2$ are the numbers of transmitted codewords by the two transmitters. Each realization of the state imposes two sets of constraints on $N_1, N_2$ referred to as the geometric and reliability constraints. In a scenario where the transmitters are only aware of the statistics of Tx-Tx~asynchrony, it is shown how one designs $N_1,N_2$ to achieve target transmission rates for both users and minimize the probability of unsuccessful decoding. An achievable region is characterized for the codebook rates in a two-user GIC-SDA under the requirements that the transmissions be immediate and the receivers treat interference as noise. This region is described as the union of uncountably many polyhedrons and is in general disconnected and non-convex due to infeasibility of time-sharing. Special attention is given to the symmetric case where closed-form expressions are developed for the achievable codebook rates.