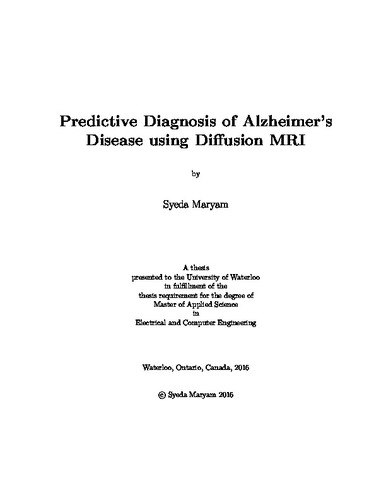 Age-related neurodegenerative diseases, including Alzheimer’s Disease (AD), are an increasing cause of concern for the world’s ageing population. The current consensus in the research community is that the main setbacks in the treatment of AD include the inability to diagnose it in its early stages and the lack of accurate stratification techniques for the prodromal stages of the disease and normal control (NC) subject groups. Numerous studies show that AD causes damage to the white matter microstructure in the brain. Commonly used techniques for diagnosing this disease include, neuropsychological assessments, genetics, proteomics, and image-based analysis. However, unlike these techniques, recent advances in Diffusion Magnetic Resonance Imaging (dMRI) analysis posits its sensitivity to the microstructural organization of cerebral white matter, and hence its applicability for early diagnosis of AD. Since tissue damage is reflected in the pattern of water diffusion in neural fibre structures, dMRI can be used to track disease-related changes in the brain. Contemporary dMRI approaches are broadly classified as being either region-based or tract-based. This thesis draws on the strengths of both these approaches by proposing an original extension of region-based methods to the simultaneous analysis of multiple brain regions. A predefined set of features is derived from dMRI data and used to compute the probabilistic distances between different brain regions. The resulting statistical associations can be modelled as an undirected and fully-connected graph encoding a unique brain connectivity pattern. Subsequently, the characteristics of this graph are used for the stratification of AD and NC subjects. Although the current work focuses on AD and NC subject populations, the perfect separability achieved between the two groups suggests the suitability of the technique for separating NC, AD, in addition to subjects in the prodromal stage of the disease, i.e., mild cognitive impairment (MCI).