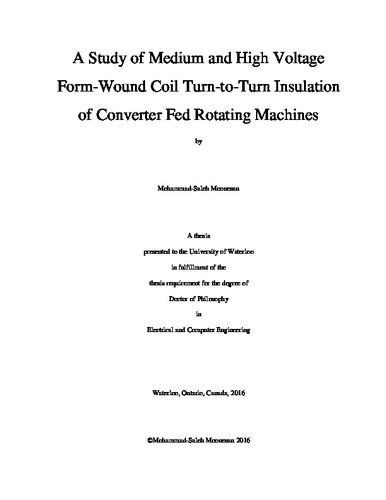 Converter fed medium voltage motors are increasingly being employed in industrial processes due to their higher efficiency and greater flexibility with respect to speed control. The increased use of motor adjustable speed drives has raised concerns about the adverse effects of the distorted voltage waveform of the converter on the insulation of the machine. Recent designs include a higher level of insulation than that are used in conventional AC-fed motors because of the presence of fast transients and harmonics in the voltage waveforms at the motor terminals. Many studies have focused on this problem, with most emphasizing on the stress-grading system and relatively a few investigating the form-wound turn insulation, with some contradictory reported results. Hence, the focus of the present research is to study the turn insulation of form-wound machines subjected to distorted voltage waveforms from converter pulses. The effect of pulse parameters such as rise time, pulse duty cycle, and switching frequency on the times-to-failure of turn insulation under unipolar and bipolar square pulses are investigated. Back-to-back turn insulation samples, with enamel insulation, were prepared based on IEC 60034-18-42 with improved insulation in the crotch region of the samples to prevent failures in this region. A high voltage pulse generator, and an antenna based PD measurement system, were implemented in order to investigate significant factors affecting insulation system using PD activity measurements and times-to-failure experiments. The experimental results were used to identify the significant parameters of aging as well as suggesting the aging mechanism involved. A point-to-plane setup having an insulation film representing a single defect in turn insulation system, was also implemented to investigate the PD features and their relationship to the times-to-failure of back-to-back samples in depth. Using this setup, a series of measurements were carried out to investigate the significance of charge accumulation on the times-to-failure of insulation samples. By conducting surface charge measurements, surface potential measurements, and COMSOL® simulations on the point-to-plane setup with different insulation films, the influence of accumulated charge in modifying the electric field and therefore the times-to-failure of insulation systems was studied for different pulse types and switching frequencies in order to explain the results of aging experiments and to validate the presented aging mechanism.