Quantifying the Effects of Solar Panel Orientation on the Electrical Grid 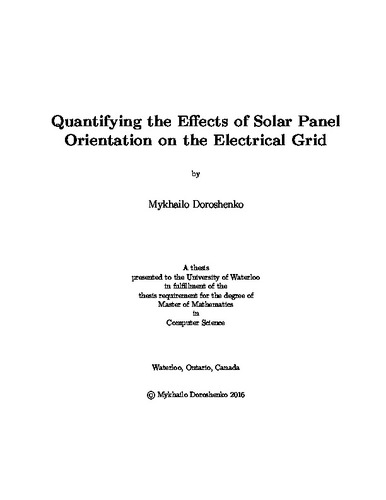 As the prices of solar panels continue to decline, energy production from solar farms is skyrocketing, leading to a situation where, at certain times, solar farms produce more energy than can be consumed. Today, the only control over this excess electricity generation is curtailment, meaning excess power is wasted. A source of control that is often overlooked is the choice of orientation of fixed (non-tracking) solar panels: panels oriented towards the east, for example, produce more electricity earlier in the day and less later in the day, compared to similar panels oriented south. While this results in an overall reduction in generation, it matches solar generation with electrical grid load better, thus reducing curtailment. We use optimization to study the degree to which non-tracking panel orientation can be used to meet each of four possible grid requirements: load following, peak reduction, reduction in operation cost, and ramp reduction. Assuming complete control over the orientation of all panels, we find that, in the three jurisdictions we studied, i.e., Ontario, British Columbia, and Texas, orientation can be very useful in reducing ramps (reducing them up to 30%) but does not appear to be useful for reducing net load peaks.