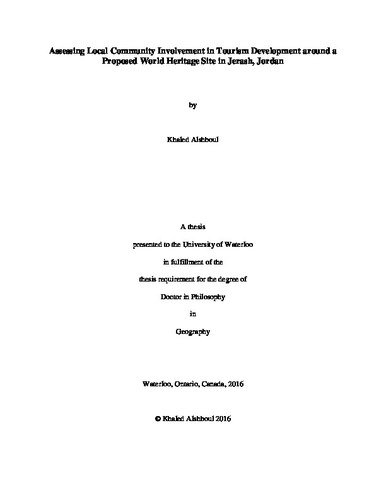 Research on community involvement in development has been conducted in diverse fields of study including planning, geography, community development, anthropology, and others. In the disciplines of tourism, many attempts have been made to shift from a conventional form of tourism towards a more sustainable form. Sustainable tourism calls for a greater role for local communities to engage in its planning, development, and management. The ultimate goal of community engagement in tourism is to strive for sustainable practices that balance the needs and interests of local communities with broader industry needs. Various efforts have been made, particularly in developing countries, to promote community participation and translate it from concept to practice. However, its appropriateness and success are the major points of debate among tourism practitioners and scholars. The difficult financial and economic situation facing Jordan calls for a renewed focus on how best to provide social and economic initiatives and opportunities for communities in the country. It is argued that involving local communities in tourism leads to sustainable tourism development, but surprisingly very few studies have been conducted to understand local communities’ views and their involvement in tourism in the Arab countries (Middle East Region). Using Jerash as the study area, this research examines local communities' perspectives on tourism development and prospects for improvements in community engagement in Jordan. The dissertation objectives are to: 1) to assess local views about tourism in Jerash and their interest in its success; 2) to document the type and level of prevailing local involvement in tourism; 3) to examine local perspectives on the role of the government in tourism development; 4) to examine local perspectives on community contributions to tourism. Data employed in this research were collected using mixed methods, including participant observation, household questionnaire, and semi-structured interviews. Field work was conducted during July – October 2013, and in October 2014. Results show that the tourism sector is performing at a level far below its potential. In particular, hotels and restaurants in Jerash need to be increased to meet demands from tourist and domestic visitors. Also, tourism development projects would not have been possible without the support of the local communities. Some projects were successful in providing meaningful employment to local people. The study findings conclude that residents agreed that the local community in Jerash supports tourism, and they think that tourism is an important tool to enhance and develop the community, economy, and the environment. The respondents agreed that community-oriented tourism initiatives might be one of the best solutions to solve issues such as poverty and unemployment. In addition to the lack of information about tourism development projects among local residents in their area, it was found that decisions related to tourism development were made without consultations with the local community as the level of local residents’ involvement in tourism was limited, and tourism benefits were not shared fairly among all areas in Jerash. Most residents believe that only people who are close to the archeological site are able to establish or work in tourism businesses such as restaurants, souvenir shops and tourist guides. A fair distribution of tourism benefits could be achieved if the government focused on expanding tourism development to other areas in Jerash Governorate instead of concentrating around the archeological site only. In general, the study concludes that residents support tourism and seek more tourism development in their areas.