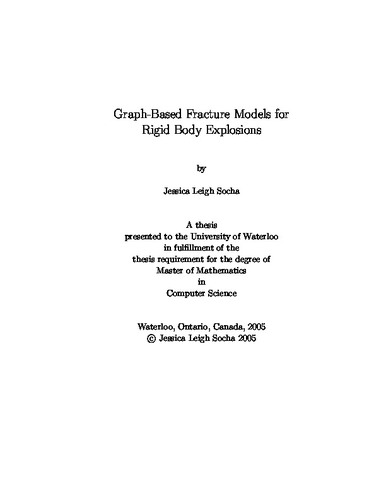 Explosions are one of the most powerful and devastating natural phenomena. The pressure front from the blast wave of an explosion can cause fracture of objects in its vicinity and create flying debris. In this thesis, I outline a previously proposed explosion model. An explosion is treated as a fluid with its behaviour governed by the Navier-Stokes equations and the gaseous products modeled using particles. Explosions are simulated as a means for initiating fracture of rigid bodies in the vicinity of an explosion. <br /><br /> In contrast to fracture models that are based on physics, I propose a new approach to simulating fracture which treats fracturing the rigid body as a pre-processing step. A rigid body can be pre-fractured by treating it as graph and using one of the two proposed graph partitioning algorithms to divide the object into the desired number of pieces. By treating fracture as a pre-processing step, much less computation need be done during the simulation than models based on physics. <br /><br /> It is shown that the recursive breadth-first search graph partitioning algorithm produces physically realistic results for shattering windows that are consistent with observations of real broken windows. The curvature-driven spectral partitioning algorithm fractures objects into two pieces where the object is weakest, where weakest is defined by the area with largest curvature. Numerical simulations of explosions and fracture were conducted to produce data that was used by a ray tracer and volume renderer to create images which were assembled into animations.