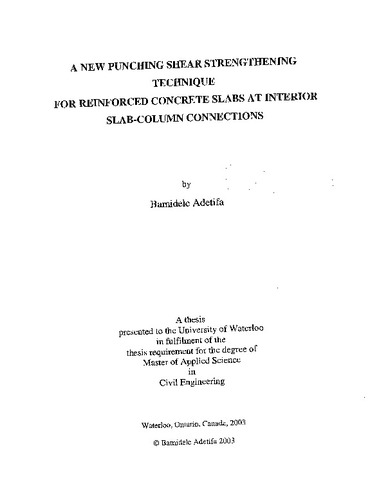 In certain situations the punching strength of a connection may become inadequate after construction due to changes of connection geometry from drilling or coring, or from changes of building use, or construction and design errors. The use of shear reinforcement in the form of Shear Bolts is a new approach to strengthening slab-column connections. Reported in this thesis are the results of research on the use of shear bolts for reinforced concrete interior slab-column connections without unbalanced moments. Six slab specimens were tested with different configurations of shear bolts and without shear reinforcement to verify the effectiveness of this method of reinforcement. The central idea is an externally applied shear reinforcing technique that provides strength in shear at par with other conventional reinforcement types on the one hand and offering the distinct advantage and flexibility of external application after construction. A shear bolt consists of an unhardened steel shaft threaded at one end and flared out to form a bearing/anchor surface on the other end. All six specimens were designed to fail in shear before reaching their flexural capacity, two of which were more critical than the others because of the presence of openings simulating utility ducts around the column perimeter. From the tests, comparisons of predicted loads with the failure loads indicated a higher ultimate load for slab reinforced with the bolt system. Similarly, strain measurements from strain gauges attached to the longitudinal steel and deflection profiles of the slab showed that the new method was efficient in increasing the shear capacity of the slabs. In summary, the test program showed that shear bolts are effective in transforming the behaviour of the slab-column connections from a brittle punching shear failure mode to a more ductile flexural one. Deflection profiles at different load stages, and particularly at failure, show increased deflections for specimens reinforced with bolt reinforcements. This indicates an increased ductility at the connection. Similarly, load and flexural reinforcement strain magnitudes show substantial improvements in the strength of the connections.