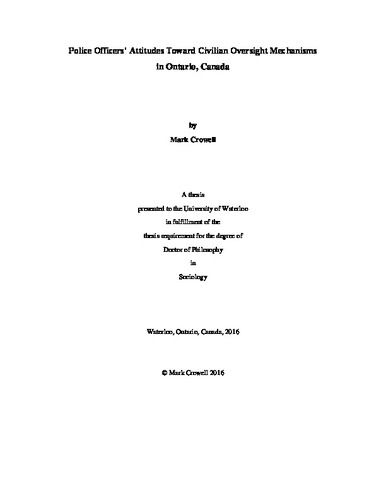 Police services in Canada were historically self-regulating institutions that managed internally their administrative affairs and allegations of professional misconduct. In recent decades, however, there has been an inexorable movement to external review in many Western nations, including Canada, whereby civilians have become increasingly involved in the administrative oversight of policing and the investigation of complaints about alleged misconduct. Research on how police have responded to these developments is sparse and overwhelmingly non-Canadian. This study examines the attitudes and experiences of police officers pertaining to three types of civilian-led agencies that govern police practices and conduct in Ontario, Canada. To wit: i) Police Services Boards, which provide administrative and financial governance of police services; ii) The Special Investigation Unit (SIU), which investigates instances where citizens have been seriously harmed, killed or allegedly sexually assaulted while in the care of the police; and iii) The Office of the Independent Police Review Director (OIPRD), which reviews and sometimes investigates citizens’ complaints about police conduct. A mixed-methods sequential explanatory research design was utilized in this study. In Phase 1: Survey Questionnaire, 1593 police officers from a large police service in Ontario responded to an online survey questionnaire that queried them about their experiences and perceptions in relation to the three previously-mentioned agencies and about their own police service’s Professional Standards Bureau. In Phase 2: Semi-structured interviews, 40 interviews were conducted with police officers from the same police service and six interviews were conducted with senior executive representatives from stakeholder organizations in Ontario and across Canada. Results from both the survey questionnaire and the interviews revealed that most police officers were generally accepting of the need for civilian-led oversight initiatives to uphold accountability and public trust in policing. However, this study found that many police officers queried the qualifications (i.e., knowledge, skills, training and experience) of the involved civilian investigators and administrators. Respondents also raised concerns about issues of “procedural justice” (e.g., the quality and frequency of communication during investigations; speed of investigations; notification regarding the outcome) during the course of both civilian-led and police-led investigations into alleged misconduct. Although the majority of respondents expressed a preference for alleged misconduct to be investigated by their own Professional Standards Bureau rather than by personnel from the SIU or the OIPRD, evidence was mixed on the extent to which police officers perceived that civilian oversight agencies pose a significant threat or challenge to their status as “professionals.” Many respondents opined that police officers are more closely scrutinized than other professional/occupational groups and are held to higher standards of accountability. A number of practical recommendations are proposed related to enhanced communication and education for police services and relevant stakeholders in Ontario, Canada and beyond.