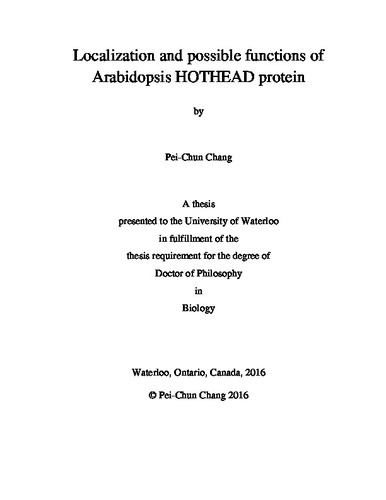 Molecular analyses using sixteen insertion-deletion polymorphic markers revealed that somatic sectoring occurs relatively frequently during the course of normal vegetative development. This is the first report that documents the spontaneous but targeted appearance of unique genomic insertions at multiple discreet loci in single plants. These sectors hosted genetic variation attributed to single nucleotide changes, insertions, or sequence loss. The most important finding is the appearance of a 54 base-pair insertion in the progeny that resulted in an identical sequence match with the corresponding allele of the grand-parental genome, rather than the genome of the immediate parent. Because somatic sectoring was observed five times more frequently in hothead (hth) mutant plants, studies were initiated to determine HTH protein localization with a view toward elucidating its possible functions. Here, I present the results of HTH protein localization using a fluorescent protein-tagged HTH fusion protein generated by a native promoter-driven construct (annotated as HTHpro:HTH-FP). The HTH-FP protein was predominantly localized to the epidermis of seedling and mature tissues; moreover, it was also present in the seed coat outer integument that is of epidermal origin. Most interestingly, in seedlings the HTH-FP protein was localized to the endoplasmic reticulum (ER) and ER-derived structures called ER bodies. Since ER bodies have been previously associated with stress response, the ER body localization suggests a role of HTH in stress responses. This notion is supported by the effect of the wounding hormone methyl jasmonate which elevated HTH expression in wildtype plants and induced ER bodies in rosette leaf epidermis of HTHpro:HTH-FP plants. Previously, HTH has been proposed to function either as a mandelonitrile lyase involved in cyanogenesis or as a fatty alcohol dehydrogenase involved in the biosynthesis of cutin monomers (fatty acids). To determine whether HTH has any of these catalytic activities, a maltose binding protein (MBP)-HTH fusion protein was generated in bacteria and the recombinant protein used for in vitro assays. Although results of the enzymatic assays were inconclusive, bioinformatics analyses of putative catalytic residues favor functional involvement in fatty alcohol dehydrogenation, rather than in nitrile lyation. This prediction suggests that HTH might be functionally distinct from the closely-related enzyme, mandelonitrile lyase. In addition, coexpression analysis showed that HTH is coexpressed not only with genes involved in cutin synthesis but also with those modulated by pathogens and stress. Although results also pointed towards an association between HTH and defense/stress response, how this association might be linked to genome instability observed in hth mutants is discussed.