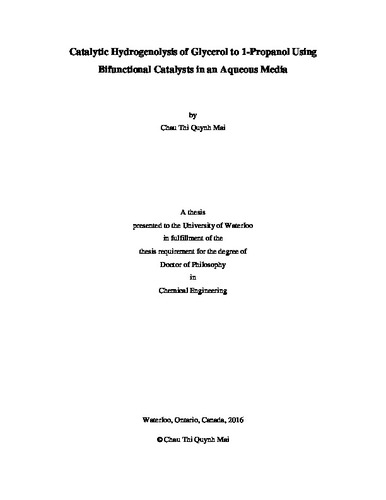 This is my electronic PhD Thesis after reviewing (6.657Mb)

Biodiesel is an attractive alternative fuel obtained from renewable resources and glycerol is produced as a major byproduct in the biodiesel industry. Upgrading glycerol to other valuable chemicals will contribute to an economic sustainability of the biodiesel industry. Valuable commodity chemicals such as 1,2-propanediol (1,2-PD), 1,3-Propanediol (1,3-PD) and 1-Propanol (1-PO) could be produced by catalytic hydrogenolysis. Although much work has been done towards the conversion of glycerol to 1,2-PD and 1,3-PD, the direct conversion of glycerol to 1-PO has not received much attention. From an industry point of view, the production of 1-PO is very interesting. 1-PO has potential applications as a solvent, organic intermediate and can be dehydrated to produce “green“ propylene for the production of polypropylene. Therefore, the development of a new process for the efficient conversion of glycerol to 1-PO will contribute to new “green” chemicals which will benefit the environment and make biodiesel processes more profitable as 1 kg of glycerol is produced for every 10 kg of biodiesel. In this research, heterogeneous hydrogenolysis of glycerol to 1-PO was carried out in a batch reactor using a bi-functional catalyst (prepared by a sequential impregnation method) in water, a green and inexpensive liquid medium. It was found that a bi-functional solid catalyst consists of a non-noble metal Ni for hydrogenation and an acidic function of silicotungstic acid (HSiW) supported on alumina (Al2O3) to be an active catalyst for the one-pot synthesis of 1-PO from glycerol and H2 in a liquid phase reaction. A systematic study has been carried out to assess the effects of operating conditions on the glycerol conversion. The catalysts were characterized using BET, XRD, NH3-TPD, TPR, TGA and FTIR techniques. The effect of different metals (Cu, Ni, Pd, Pt and Cs) supported 30HSiW/Al2O3 catalyst, heteroatom substitution (HSiW, HPW and HPMo) on NiHPA/Al2O3 catalysts and 10Ni/30HSiW supported on different supports (Al2O3, TiO2 and MCM-41) were studied to determine to what extent these components affect the catalytic activity of the NiHPAs/Al2O3 catalysts for the hydrogenolysis of glycerol. The effect of the preparation process on the catalytic activity and the structure of the catalyst was also studied. It was found that 1%Pt is the best promoter for the production of 1-PO in a stainless steel batch reactor (the selectivity to 1-PO was 59.2% at 45.3% conversion of glycerol). 1%Ni, a much cheaper metal, has fairly comparable reactivity to 1%Pt (the selectivity to 1-PO was 54.7% at 39.2% converison of glycerol). It was reported that the catalytic activity and thermal stability towards decomposition of the catalyst dependends on heteroatom substitution. Using NH3-TPD, XRD and FTIR it was found that while the Keggin-structure of HSiW and HPW supported catalyst is stable up to a treatment temperature of 450oC, the Keggin-structure of a HPMo supported catalyst was decomposed even at a treatment temperature of 350oC; the decomposition of HPMo into MoO3 is likely to be responsible for the inactivity of the NiHPMo catalyst for glycerol conversion. HPW and HPMo lost their acidity much more readily than HSiW, and a HSiW supported catalyst was the best candidate for 1-PO production. The catalytic activity and the acidity of 10Ni/30HSiW supported catalyst are influenced strongly by supporting 10Ni/30HSiW on different supports. Using XRD and FTIR it was found that the thermal treatment during the preparation process indeed affected the structure and the activity of the catalyst to some extent. The loss in activity of the catalyst, the decomposition in Keggin-structure of HPAs occur if the treatment temperature is higher than 450oC. It is important to note that this is the first report on a 10Ni/30HSiW suported catalyst developed for the one-pot hydrogenolysis of glycerol in a water media with high conversion of glycerol (90.1%) and high selectivity to 1-PO (92.9%) at 240oC and 580PSI hydrogen using a Hastelloy batch reactor. The activation energy Ea of this reaction is 124.1kJ/mol. Reaction pathways for the hydrogenolysis of glycerol using a bifunctional catalyst 10Ni/30HSiW/Al2O3 is proposed. It is believed that acidity plays an important role for the dehydration and Ni plays an important role for the hydrogenation. It is suggested that with acidic catalysts, the main route for the formation of 1-PO from glycerol is via either the hydrogenation of acrolein or further hydrogenolysis of 1,2-PD (and 1,3PD) where 1,2-PD (and 1,3-PD) and acrolein are the intermediate species in the formation of 1-PO from glycerol. The formation of 1,2-PD and 1,3-PD takes place through an initial dehydration of the primary or secondary hydroxyl groups on glycerol to give acetol or 3- hydroxylpropanaldehyde (3-HPA). The hydrogen activated on the metal facilitates the hydrogenation of acetol or 3-HPA to release 1,2-PD or 1,3-PD respectively. However, dehydration of 3-HPA on the acid sites forms acrolein. Further hydrogenolysis of diols or hydrogenation of acrolein produces 1-PO. 1,3-PD that is a very high value-added chemical can also be obtained from hydrogenolysis of glycerol using a Ni-HSiW supported catalyst. To improve the selectivity of 1,3-PD it is suggested that the catalyst should have high hydrogenation activity for the intermediate 3-HPA. The equilibrium between acrolein and 3-HPA in the hydration-dehydration step is important, so it is essential to tune the bi-functional catalyst and the conditions of the reaction to form 1,3-PD from 3-HPA. A study of promoter effects for the activity of catalyst to form 1,3-PD is recommended.