Location-Routing Problems with Economies of Scale 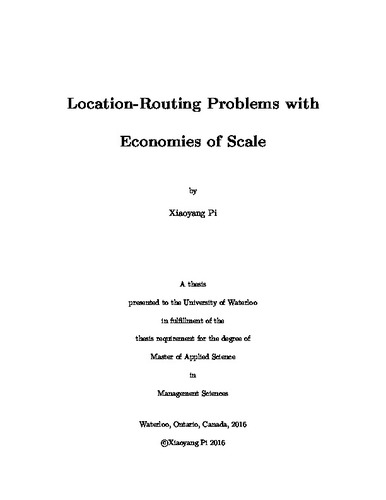 The purpose of the location-routing problem is to select facility locations, assign customers to facilities, and design routes between facilities and customers. The most common objective is to achieve minimal cost. In general, for the standard location-routing problem, the total cost includes xed costs to open Distribution Centers (DCs) plus the transportation costs from facilities to customers. In this thesis, we also consider the variable cost of facilities' operations. Two forms of the variable cost are proposed. One is a linear cost function with a constant variable (operating) cost per unit; the other employs a concave function of total throughput at any DC as its cost model. The latter is studied because economies of scale can be achieved for large facilities. By economies of scale, we mean that the variable cost per unit is a decreasing function of the number of units of throughput; that relationship is expressed by a concave function. Two solution methods are developed, both based on a genetic algorithm. After some preliminary tests, one approach is employed for further testing. Computational experiments of the model without variable cost are performed on published data sets. Then extensive testing is done on modi ed data sets for cases with operating cost but without economies of scale, and for other cases when economies of scale are present. Analysis of the in influence of economies of scale is provided. First, we brie y test how parameter values a ect the economies of scale. Then we extensively analyze the tradeo s between operating costs of facilities and transportation costs. Conclusions are drawn and further research is suggested.