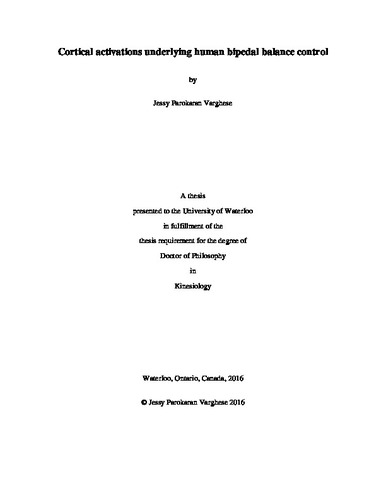 Human bipedal balance is a complex sensorimotor task controlled by the central nervous system. Balance impairments, caused by aging or neuromuscular diseases, often lead to falls which are one of the leading causes of injury and subsequent increases in health care costs. Hence, understanding the mechanisms underlying human bipedal balance control has many functional and clinical implications. Traditionally, it was believed that balance control is mediated by subcortical structures. However, evidence from research in the past few decades has shown that the cerebral cortex plays a major role in bipedal balance control. Nevertheless, the cortical contributions in balance control are still unclear. Hence, the purpose of this thesis was to extend the understanding of cortical involvement in human bipedal balance control. Specifically, the two overarching goals of this thesis were to examine evidence of a cortical network involvement and its generalizability across reactive and predictive balance control. These two overarching goals were addressed through four different studies. Study 1 explored the frequency characteristics and mechanisms underlying the generation of perturbation-evoked potentials. Study 2 investigated cortical activity linked to ‘automatic’ balance reactions that occur continuously while standing still and its dependence on the amplitude of these balance reactions. Study 3 examined the cortical activations related to the preparation and execution of anticipatory postural adjustments that precede a step and whether the activations are dependent on the context of control. Study 4 was designed to examine the functional connectivity in balance control and whether similar networks underlie reactive and predictive balance control. Studies were conducted on young healthy adults and cortical activations were acquired using electroencephalography during feet-in-place balance reactions, standing still, and voluntary stepping. Overall, the findings of these studies provided direct and indirect evidence for the involvement of a cortical network in balance control and its generalizability across different classes of balance control. This work reinforces the view that cortical networks likely play an important role in the control of stability. It is proposed that the synchronized activation of neural assemblies distributed across the cortex might have contributed to the balance-related cortical activations. The findings of this thesis extend the understanding of cortical control of human bipedal balance that may help to inform future, more precise models of the cortical contributions to balance control. This, in turn, can inform future diagnostic and therapeutic approaches to improve mobility among those with balance impairments.