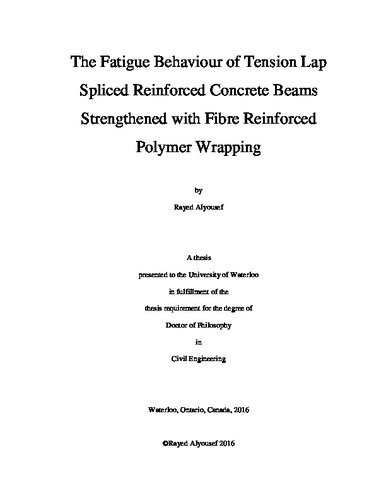 Many reinforced concrete structures containing lap splices were constructed before modern bond and fatigue design codes came into existence and are subjected to fatigue loading, which may lead to a bond failure even when the applied load is far below the ultimate load for a bond failure under a monotonic loading. Fatigue loads result in a deterioration of the bond interaction between the steel and concrete and interrupt the force transfer mechanism resulting in an increased deflection, an increased number of cracks and their widths, and a decreased load carrying capacity of reinforced concrete elements of structures. Some of these structures require strengthening to enhance their bond strength at lap splices. This study was aimed at increasing our understanding of the behaviour of the bond between the steel bar and the concrete along the lap splice region for structures subjected to cyclic loading. An additional aim of the study was to investigate the effect of fatigue loading on the bond between concrete and steel, and the ability of the new high and low modulus fiber-reinforced polymer (FRP) sheets to enhance the fatigue performance of a tension lap splice. Fifty three beams were cast and tested under monotonic and fatigue loading. The beams dimensions were 2200 mm in length, 350 mm in height and 250 mm in width. Each beam was reinforced with two 20M bars lap spliced in the constant moment region of the tension zone and two 10M bars in the compression zone outside the constant moment region. The test variables were the concrete cover, the presence or absence of FRP wrapping, the type of the FRP wrapping glass or carbon fiber-reinforced polymer (GFRP or CFRP), the type of loading and the fatigue load range. The minimum load applied was 10% of the static bond capacity of the specimen. The maximum load was varied to obtain fatigue lives between 1,000 and 1,000,000 cycles. The test frequency for all cyclic tests was 1.3 Hz. The results of the tests under monotonic load showed that the GFRP wrapped beams had an increase in bond strength of approximately 25% compared to the unwrapped beams for each of the concrete covers. However, the CFRP wrapped beams had a percentage increase in bond strength that decreased as the concrete cover increased. The CFRP wrapped beams had increases in bond strength of 71%, 60% and 44% compared to the unwrapped beams for concrete covers of 20 mm, 30 mm and 50 mm, respectively. The results of the tests under fatigue load showed that all beams failed by a bond failure except for those beams that exceeded the fatigue life limits for a longitudinal bar. As expected, these beams failed by fatigue rupture of the longitudinal steel bars. The GFRP and CFRP sheets increased the fatigue strength (measured as the applied load range for a given fatigue life) of the wrapped beams for all concrete covers compared to that of the unwrapped beams. The longitudinal splitting cracks for the FRP wrapped beams were finer in width and larger in number compared to those cracks for the unwrapped beams. A crack growth model was developed to calculate the fatigue life of the bond specimens and to calculate the slip and the deflection due to stress changes in the steel and concrete due to cracking, and compare it to the measured slip and deflection. There is also a good agreement between the calculated number of cycles with the actual fatigue data for all different wrapping conditions and all different concrete cover thicknesses. Also, only a small amount of the inelastic slip and the inelastic deflection are due to the stress changes in the steel and concrete due to splitting cracking. The remaining inelastic slip and inelastic deflection which are due to deformation of the concrete in front of the steel rebar lugs is much larger.