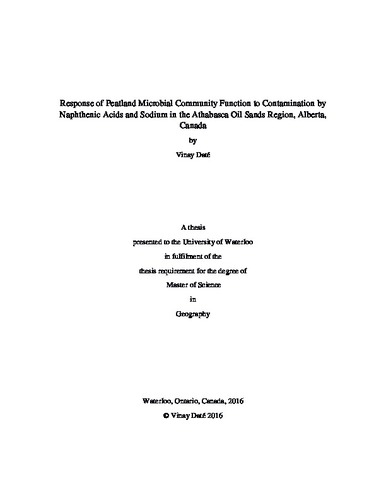 Reclamation of closed oil sands mining operations in former pristine boreal ecosystems of the Athabasca Oil Sands Region of Alberta, Canada (AOSR) requires construction of new fen land uses such as peatlands in order to meet the environmental regulatory requirements for restoration of ‘equivalent landscape capacity’ and because ‘wetlands are required as an integral part of the reclaimed landscape’ (Alberta Government 2000). Reconstruction rather than restoration is required due to the extensive disruption to the vegetation and hydrology of these sites inherent to the mining process. Such sites will be constructed with tailings sands forming part of the aquifer; consequently, they may be exposed through leaching to a variety of chemical contaminant species either not present (e.g. naphthenic acids) or present at significantly higher-than-baseline concentrations (Na+) than in the pre-disturbance sites. The presence of these contaminants is likely to affect both the plant and microbial communities, which are the two major players in the carbon cycling function of peatland landscapes, and the effects of these contaminants on the microbial community is unknown in such landscapes. Oil sands process-affected water (OSPW) contains high concentrations of the contaminants to which these sites might be exposed. This study therefore tested the effects of OSPW on the aerobic and anaerobic carbon-cycling potential activity of the microbial communities of a variety of reference peatlands from the AOSR to determine the possible effects these contaminants might have on the communities of these constructed sites, through measurement of substrate-induced respiration (SIR) and methanogenic potential respectively. This study also measured the baseline aerobic and anaerobic carbon-cycling potential of these sites, to provide a reference baseline against which site managers might measure the development of such sites. Aerobic carbon-cycling potential at the start of the growing season was not significantly different (p=0.799) between the hypersaline rich fen and the Sphagnum-dominated poor fen, which both had significantly greater aerobic carbon-cycling potential than the treed rich fen at the start of the growing season. The sites’ aerobic carbon-cycling potential did not significantly differ between any pair of sites at midseason. The low potential of the treed rich fen was attributed to phosphorus limitation indicated by a substrate preference for low molecular-weight organic acids in that site. None of the sites displayed any significant change in overall SIR on exposure to OSPW, though the hypersaline site showed an SIR preference for saccharide compounds only under contamination, attributed to salt stress response from the high levels of Na+ present in OSPW. The overall lack of effect of OSPW contamination was likely either due to short incubation times (6h) or the immobilization of OSPW contaminants through physical and chemical interactions with the peat substrate. Control methanogenic potential was highest at the treed rich fen, significantly lower at the poor Sphagnum-dominated fen, and significantly lower than either of the other two sites at the hypersaline rich fen. The extremely low control methane of the hypersaline rich fen site was likely due to the presence of sulfate in the pore water of that site and inhibition of methanogenesis via the presence of a more thermodynamically favourable terminal electron acceptor. Exposure to OSPW significantly decreased methanogenic potential in both the treed rich fen and the hypersaline rich fen, but had no significant impact on methanogenic potential in the Sphagnum-dominated poor fen. As amendment with OSPW containing twice its usual concentration of Na+ did not significantly further decrease methanogenic potential, it appears unlikely that high sodium concentrations are responsible for the inhibitory effect. The mechanism of resistance to OSPW inhibition in the Sphagnum-dominated poor fen is also unclear, but may be the consequence of a more-resilient microbial community or the rapid consumption by the microbial community of any alternative electron acceptors that might be suppressing methanogenesis. These results have implications for the construction of site-reclamation peatlands. Identifying the mechanism of resistance to OSPW contamination of methanogenesis in Sphagnum peat will inform choices about its use in the construction of such sites.