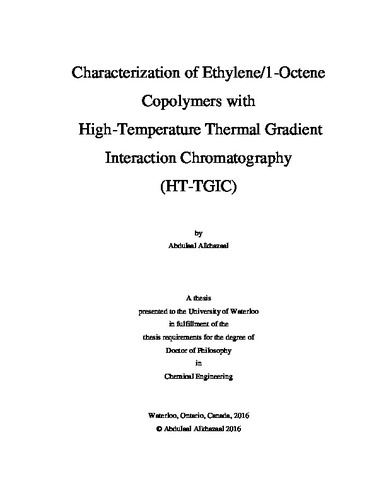 Chemical composition distribution (CCD) of polyolefins is being measured by well established crystallization techniques, but they are limited to semi-crystalline polyolefins. High-temperature thermal gradient interaction chromatography (HT-TGIC) was recently developed for CCD determination of semi-crystalline and amorphous polyolefins, thus broadening the range of techniques available for the analysis of polyolefin chemical composition distributions. HT-TGIC fractionation relies on the interaction of polyolefin chains with a graphite surface upon a temperature change in an isocratic solvent based on the adsorption/desorption mechanism. The main objective of this research is to understand the fractionation mechanism of HT-TGIC and study factors controlling this mechanism using one series of ethylene/1-octene copolymers having similar molecular weight averages, but a distinct 1-octene fraction (Category I) and six series of ethylene/1-octene copolymers that in each series having a similar 1-octene mole fraction and a wider range of molecular weight averages (Category II). It was found that due to the presence of short chain branches formed via 1-octene incorporation, the shape of the HT-TGIC profile and the position of the peak elution temperature shift to lower and become broader with increasing 1-octene mole fraction. Also, the peak elution temperature is gradually linearly related to comonomer content. 23 experimental factorial design were applied to three individual and blend samples of ethylene/1-octene copolymers (Category I) to regulate which operation parameters (cooling rate, heating rate, and heating flow rate) influence HT-TGIC peak temperatures and profiles. The cooling rate has no significant effect on the peak elution temperature and the broadness of the HT-TGIC chromatograms. On the other hand, the heating rate and the elution flow rate, as well as their interaction, substantially influence the HT-TGIC peak temperature and breadth. Four individual samples and their blend of ethylene/1-octene copolymers having different comonomer fractions and approximately the same molecular weight averages were chosen to investigate how commercial Hypercarb columns with distinct lengths and average particle sizes affected HT-TGIC fractionation. Neither average particle size nor column length plays an important role on the fractionation of polyolefins and their blends. Interestingly, the fraction of the component with high comonomer content in a binary blend could affect the peak position of the fraction with low comonomer content, perhaps because of co-desorption effects. The joint effect of chain length and comonomer fraction on HT-TGIC chromatograms and the position of peak elution temperature were investigated using sets of ethylene/1-octene copolymer samples that each set had different chain length and similar 1-octene fraction (category II). The peak elution temperature decreased exponentially, and the profiles became increasingly broader below a critical number average chain length value that increased linearly with the fraction of comonomer in the copolymer. Stockmayer distribution and Monte Carlo simulation estimating the distribution of average (AESD) and longest (LESD) ethylene sequences were used to explain the observed behavior of HT-TGIC profiles. It was found that no simple correlation exists between ethylene sequences in the copolymers and peak elution temperature, but there is a strong evidence that axial dispersion is responsible for symmetrical broadening of the HT-TGIC profiles. Also, the HT-TGIC of binary blends was studied, finding that components with similar 1-octene contents and dissimilar chain lengths tend to increase co-adsorption/co-desorption effects.