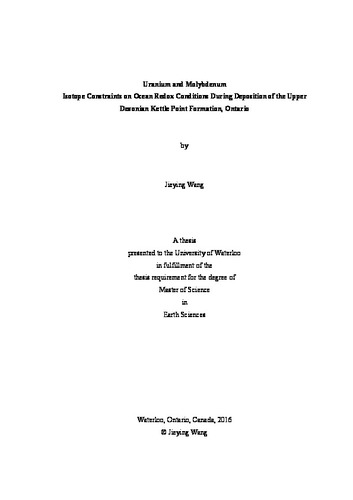 The Late Devonian extinction event was among the most severe Phanerozoic mass extinction events, which led to a decline in the abundance and diversity of marine and terrestrial ecosystems, particularly tropical shallow-marine faunas. However, the key trigger of this event is still being debated. Here, a multi-proxy study using Mo and U isotopes and elemental data from black shales of the Kettle Point Formation (southwestern Ontario, Canada) has been carried out to evaluate the role of local versus global ocean redox conditions on the Frasnian-Famennian mass extinction event. High total organic carbon (TOC) (3.1-15.6 wt%) and total sulfur contents (1.2-6.0 wt%) as well as high Mo (38–448) and U enrichments (3-27) and high Mo EF / U EF ratios (average = 10.3 ± 2.4, 1 SD, about 3× the modern seawater weight ratio) are observed in the black shales, suggesting a locally euxinic depositional environment with Fe-limitation. The high Mo/U ratios also suggest operation of an Fe-Mn particulate shuttle that accelerated transfer of Mo to the sediments. A distinctive change in the Mo/TOC slope from the lower-middle Kettle Point Formation (~8 ppm/wt% in Units 1–3) to the upper Kettle Point Formation (~35 ppm/wt% in Unit 4) may reflect a transition from moderate to weak basin restriction from the open ocean. The δ98Mo values in the Kettle Point Formation range from 0.55‰ to 1.73‰ (average = 0.96‰), and display an upward decreasing trend from Units 1–3 (0.62-1.73‰, average = 1.21‰) to Unit 4 (0.55-0.98‰, average = 0.78‰). The δ238U values vary from –0.14‰ to 0.54‰, exhibiting an upward increasing trend from –0.14‰ to 0.20‰ (average = –0.02‰) in Units 1–3, and from 0.11‰ to 0.54‰ (average = 0.34‰) in Unit 4. Based on the Mo and U isotope data and their stratigraphic trends, two scenarios are proposed: 1) a greater global extent of ocean anoxia occurred during Units 1–3, and was followed by a switch to a more oxygenated global ocean during Unit 4; and 2) the extent of local basin restriction from the open ocean changed, whereas the global ocean redox state was relatively invariant. The second scenario is preferred because a moderate negative correlation is observed between the Mo and U isotope compositions, which is more easily explained by a change in the extent of basin restriction rather than global ocean redox conditions. Our data permit a slightly greater extent of ocean anoxia/euxinia compared with today, but the relatively widespread ocean oxygenation suggests that ocean anoxia was not the key driver of the Late Devonian mass extinction event.